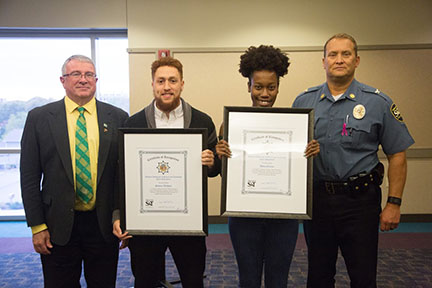 In March 2016, two Missouri University of Science and Technology students heard a sexual assault in progress near the Missouri S&T campus and intervened. Their actions saved the victim from further injury and led to the arrest and ultimate conviction of the suspect. The Missouri S&T Police Department recently honored the students, Addis Greene, a senior in computer engineering from St. Louis, and Sidney Webster, a senior in computer science from Spanish Lake, Missouri, for their bravery.

“Officers arrived to find an injured victim who reported that a subject forcibly entered her apartment and assaulted her,” says Missouri S&T Police Chief Doug Roberts. “During investigative interviews, it was determined that S&T students Addis Greene and Sidney Webster, a resident and a guest at the victim’s apartment complex, interrupted the assault, and through their prompt, appropriate and courageous actions, prevented the assault from progressing.

“The suspect was ultimately charged with rape/attempted rape and 1st degree burglary,” Roberts says. “He plead guilty and in September, he was sentenced to 15 years in the Missouri Department of Corrections.

“The University Police Department presented Greene and Webster with certificates of recognition for their bravery and dedication to a safe and secure campus community and for “stepping up” to help,” Roberts says.

Greene and Webster were also recognized in April of 2016 with the Missouri S&T STEP UP! Excellence Award for their swift and decisive actions in the described incident.

STEP UP!, founded in 2014 to help the S&T community foster a culture of awareness, intervention and inclusion, has trained 1,703 participants in its five-step decision-making model that can be used to intervene in a questionable situation. Those steps are: notice the event, interpret it as a problem, assume personal responsibility, know how to help and implement that help, or “step up.”

The STEP UP! program is designed to raise awareness of helping behaviors, increase motivation to help, develop skills and confidence when responding to problems or concerns and ensure the safety and well-being of others, says Jessica Gargus, health educator in student wellness and chair of the STEP UP! Committee at Missouri S&T.

“Sidney and Addis displayed bravery and heroism by doing exactly what the STEP UP! training teaches, Gargus says. “They noticed a problematic situation taking place and took it on themselves to intervene. This is an outstanding example of how each and every person can make a positive difference in our campus community.”