Maples to continue as interim chancellor through May 2019 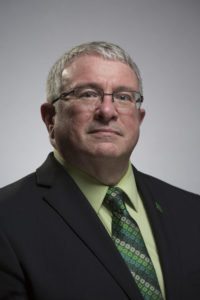 Dr. Christopher G. Maples, interim chancellor of Missouri University of Science and Technology since May 2017, will continue to serve in that capacity through May 31, 2019, University of Missouri System President Mun Y. Choi announced today (Friday, Nov. 10, 2017).

“Since his original appointment in May of 2017, Dr. Maples has engaged the faculty, students and staff to emphasize student success, research breakthroughs and effective engagement,” Choi says. “He is also credited with creating an inclusive and collegial environment at Missouri S&T that welcomes the opinions of stakeholders to improve this outstanding university.”

“I am deeply honored to serve this wonderful university, and grateful for the opportunity to continue to work with our students, alumni, faculty and staff to make Missouri S&T an even better institution,” Maples says. “The welcoming atmosphere and sense of camaraderie I’ve felt since first coming to Rolla is one reason I’m happy to stay on as interim chancellor.”

Maples’ original appointment was for one year. The UM System Board of Curators approved the extension of his appointment during the board’s meeting today at the University of Missouri-Columbia.

Previously, Maples was president of the Oregon Institute of Technology from 2008 until his retirement in 2016.

“The Faculty Senate officers have been pleased with interim Chancellor Maples’ willingness to listen to faculty concerns, and we look forward to working with him for another year,” says Dr. Sahra Sedigh Sarvestani, president of the Missouri S&T Faculty Senate.

“Dr. Maples is a perfect fit for this university – always accessible, very open and a tremendous advocate for our staff,” says Sylvia Dees, chair of the Missouri S&T Staff Council. “He is making a great difference here, and I look forward to continue working with him in the coming months.”

During his tenure at Oregon Tech, Maples led the public polytechnic university through a period of record enrollment growth, the opening of an additional campus, the launch of new degree programs and transitioning the school to a new governing board model.

Prior to his presidency at Oregon Tech, Maples spent five years at the Desert Research Institute and Nevada System of Higher Education. In the Nevada system, he served as executive vice president for research.

From 1998-2003, he served as chair of the department of geological sciences at Indiana University, and was a program director at the National Science Foundation from 1995-98.

Maples received his doctorate and master’s degrees in geology from Indiana University in 1985. He is also a 1980 graduate of West Georgia College, where he received his bachelor’s degree in geology.

Throughout his research career, Maples has received more than $4.4 million in research funding from the National Science Foundation, U.S. Geological Survey, the American Chemical Society’s Petroleum Research Fund and the National Geographic Society, among other agencies and sources. He is the author of 230 publications; they include three books co-edited by Maples and 78 peer-reviewed publications.

He has three children and is married to Sara Marcus, who works as a managing editor for Cambridge University Press.