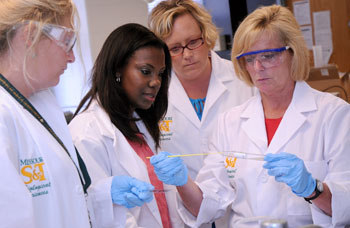 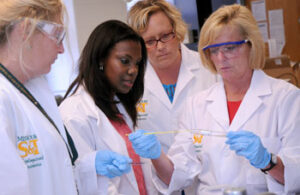 Approximately 600 elementary, middle and high school teachers from around the U.S. are visiting Missouri University of Science and Technology to learn how to better teach engineering, computer science and biomedical science.

The teachers are involved in Project Lead The Way (PLTW), a national effort to get more youth interested in and prepared to study engineering and science related fields in college. Missouri S&T is the state affiliate for PLTW and offers teacher training in several science, technology and engineering fields.

“The PLTW program is a very thorough training schedule that is hands-on,” says David Hosick, program director for Missouri S&T’s PLTW effort. “The courses are practically equivalent to having a full semester of professional development compacted into two weeks.”

Teachers from throughout the United States are signed up to take part in one or more of the one- and two-week courses.

“They’re learning how to incorporate a project- and problem-based teaching approach into their PLTW courses,” says Hosick.

The courses, which began in early June, will continue through early August. The majority of the courses will be held on the Missouri S&T campus, but those for elementary school teachers will be offered in other locations throughout the state.

In 2016-17, more than 9,000 schools in all 50 states and the District of Columbia offered PLTW programs, and more than 2 million students were enrolled in PLTW programs. Since it began in 1997, more than 40,000 teachers have been trained across the United States.