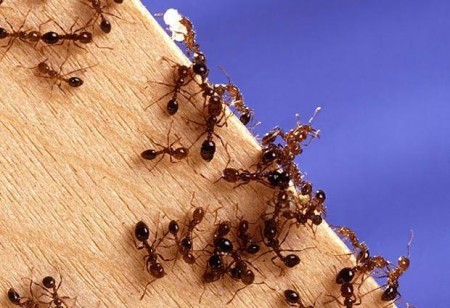 As humans, we constantly strive for a good work-life balance. New findings by researchers at Missouri S&T suggest that ants, long perceived as the workaholics of the insect world, do the same.

In fact, according to these researchers, it is imperative that some ants rest while others work to conserve food, energy and resources for the colony. And the larger the colony, the more important this work-rest balance becomes.

“It has been a long-standing question in the field as to why large colonies of ants use less per-capita energy than small colonies,” says Dr. Chen Hou, assistant professor of biological sciences at S&T and research team lead. “In this work, we found that this is because in large colonies, there are relatively more ‘lazy workers,’ who don’t move around, and therefore don’t consume energy.

“We found that the portion of inactive members of a group increases in a regular pattern with the group size,” Hou says.

The research team consistently observed that 60 percent of workers were not moving around in a 30-ant group, whereas this percentage increased to 80 percent when the group size increased to 300 ants.

“The simultaneous energetic measurements showed that the per capita energy consumption in the 300-ant group is only 50 percent of that in the 30-ant group,” Hou says.

By not consuming energy, these “lazy” ants are actually saving resources for the colony and making the colony more productive.

This realization could provide valuable insight into making our societies more productive and sustainable.

“Humans are like ants in a way that we all live together in groups, collaborating toward our own betterment,” Hou says. “Both humans and ants face similar problems of allocating resources based on tasks and energy. Understanding how ants spend their energy in relation to their group and why they do so will provide insight into conditions for individuals that allow a group to perform collective optimization of behavior, that is, in the context of sustainable use of scarce resources.”

Hou and his team, which includes two undergraduate S&T students, discuss their findings in a forthcoming issue of the journal Insect Science.

“Maximizing resource acquisition would require most individuals to be highly active, but would also result in high energy expenditure and long average foraging time. In contrast, minimizing time and energy expenditure would require most individuals to be inactive, but would also result in low resource acquisition,” Hou says. “Thus, we postulate that ant colonies balance these two optimization rules by the coordination of the forager’s interaction.”

Using Yin’s automatic algorithm, the research team was able to analyze the movements of ants over longer periods of time and higher temporal resolution than had ever previously been conducted. Previous studies had only analyzed the movements of ants in minute-long intervals. The analysis of a two-hour-long video by the research team showed a large variation in the average walking speed of ants in the colony, from .2 centimeters a second to 1.4 centimeters a second.

“This indicates it is likely that the analyses of one-minute observations give only momentary snapshots, and may not well represent the ants’ behaviors over long periods,” says Hou. “These comparisons highlight the advantage of our automatic computerized tracking technique, because it is difficult, if not possible, to manually digitize coordinates of individual ants with high temporal resolution over a long period.”

By tracking ants’ walking behaviors over longer periods of time, the researchers also determined how much energy ants consume while working as opposed to resting.

The research team, which also includes sophomore Nolan Ferral and junior Kyara Holloway, both biological sciences majors, and Mingzhong Li, a Ph.D. student in computer science, shared its findings in an article titled “Heterogeneous activity causes a nonlinear increase in the group energy use of ant workers isolated from queen and brood.” The article will be published in an upcoming issue of Insect Science.

“It is intuitive that colonies have inactive members, because these members may serve a backup role or buffer, which would be activated when colonies are under stress, such as an urgent need for nest maintenance or defense,” says Hou. “But it is unclear why the proportion of the inactive members is not a constant—why larger colonies have relatively more ‘lazy’ workers. Thus, our study calls for future research on ant interaction networking and behaviors.”