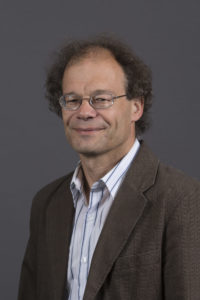 The University of Missouri System Board of Curators bestows the Curators’ Distinguished Professor title upon outstanding scholars with established reputations in their field of study. Vojta is recognized for his work in quantum physics.

In 2015, Vojta was named a Fellow of the American Physical Society. He was nominated by the society’s Division of Condensed Matter Physics for his “innovative analyses of quantum phase transitions in the presence of strong disorder.”

His research in theoretical physics has been supported by grants from the National Science Foundation totaling more than $1,400,000. It focuses on quantum phase transitions – transformations of materials near the temperature absolute zero – that occur, for example, due to changes in the material’s chemical composition. Vojta hopes to discover new unconventional states of matter that can appear in connection with these transformations, such as superconductors that have the ability to transfer electricity without any loss.

Vojta joined the Missouri S&T faculty as an assistant professor in January 2002. He was named associate professor in 2006 and full professor in 2011. Before his work at S&T, Vojta served as Heisenberg Fellow in the department of theoretical physics at University of Oxford in Great Britain.

Vojta earned a Ph.D. in physics from the University of Chemnitz in Germany in 1994. His research interests are in solid state and statistical physics; they include phase transitions, superconductivity, magnetism, as well as transport in disordered materials.

On December 13, 2016. Posted in College of Arts, Sciences, and Business, Department of Physics, People