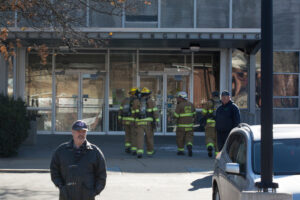 Emerson Hall at Missouri University of Science and Technology will be closed until further notice following a fire on the roof of the structure on Thursday, Dec. 8. University officials decided to keep Emerson Hall closed following a thorough inspection of the building.

No structural damage to Emerson Hall has been identified. However, there are currently concerns with air quality in several building areas. The building’s parking lot will also be closed until further notice to allow cleaning crews to access the building.

For more information about the Dec. 8 fire, visit news.mst.edu or alert.mst.edu.