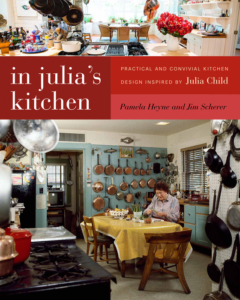 The Nest Home, Missouri University of Science and Technology’s entry into last year’s U.S. Department of Energy Solar Decathlon, will be featured in the upcoming book “In Julia’s Kitchen: Practical and Convivial Kitchen Design Inspired by Julia Child.” The book, authored by Pamela Heyne and Jim Scherer and published by the University Press of New England, will be released Tuesday, Oct. 4.

“The book ‘In Julia’s Kitchen’ shows some of Julia Child’s own kitchens as well as designs by others that have a similar attitude to Julia’s suggestions,” Heyne says. “Julia’s kitchen was a workroom; easy on the cook. Materials were practical and the size was small, so Julia did not have to do a lot of extra walking. It was also where she shared meals with guests who were comfortably seated at a table, not perched on high bar stools.”

Heyne says she chose to include S&T’s solar house because “it had a compact and efficient kitchen.”

For the solar decathlon, students were required to host two dinner parties. Heyne was impressed that Missouri S&T’s team chose a gourmet menu created by a professional chef, Alex Giger of the Public House Brewing Co. in St. James, Missouri. “Julia would have been so pleased to see these young people enjoying each other’s company and eating artfully prepared food,” Heyne says. “I interviewed her in 1989, and at that time she was concerned Americans were developing a fear of food.”

Missouri S&T’s Nest Home is made of reclaimed materials. It is named after the practice of birds that build nests using natural materials. The living area was formed using three repurposed shipping containers and its siding was made from shipping pallet lumber. The house was designed for a growing family and featured two bedrooms, a home automation system and a charging station for an electric car – all powered by 24 solar panels. The home is now part of a solar-powered neighborhood at Missouri S&T that serves as student housing.

Missouri S&T’s Solar House Design Team earned fifth place at the most recent competition, and has already been selected as a competitor for the next Solar Decathlon, which will be held October 2017 in Denver.

Missouri S&T’s 2017 proposal is titled “SILO,” which stands for Smart Innovative Living Oasis. The project will use innovative technology combined with a psychological focus to make a house suited for single or double occupancy. The team will concentrate its efforts on designing a home that can improve both the mental and physical health of residents.

“In Julia’s Kitchen” discusses which materials, layouts and equipment Child preferred and why, providing advice interspersed with Child’s humor. The authors have the full cooperation and assistance of The Julia Child Foundation. Heyne is an architect and author of “Mirror by Design” and “Today’s Architectural Mirror.” Jim Scherer is a food photographer and former staff photographer for Child’s “Julia Child and Company” and “The Way to Cook,” and photographed many of Child’s recipes for Parade Magazine.