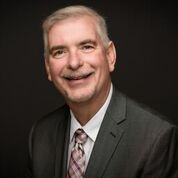 David K. Hosick, senior director of school engagement for Project Lead The Way’s west central region, has been named senior director of the Project Lead The Way (PLTW) program at Missouri University of Science and Technology. He takes over for Ben Yates, who will retire in September after serving in the position for the past five years. Hosick’s appointment took effect Monday, Aug. 1

This summer, nearly 600 teachers visited Missouri S&T for PLTW training to learn how to better teach engineering, computer science and biomedical science. And for the first time, additional training was offered to K-12 administrators so that school leaders can better understand the teacher training Missouri S&T offers.

Hosick began his career teaching science and physical education at Phelps County R-III School District in Edgar Springs, Missouri. In 1985, he moved to the Blue Springs School District, where he taught physical science and began introducing PLTW into his curriculum. From 1987 to 2012, Hosick served as the PLTW curriculum specialist for the KC Stem Alliance. In 2011, he joined PLTW as director of school engagement for Missouri and Kansas. In 2012 he was named senior director of PLTW’s west central region. He was named senior director of school engagement for PLTW in 2014.

Hosick earned a bachelor of science degree in education, a master of education degree, and an educational specialist degree in college teaching, all from the University of Missouri-Columbia.

“Mr. Hosick brings more than 30 years of education experience to this role,” says Laura Stoll, vice provost and dean for enrollment management at Missouri S&T. “That experience combined with his background with Project Lead The Way gives him a unique perspective to continue the tremendous growth we have had with the program at Missouri S&T. I look forward to working with him.”

In 2015-16, more than 8,000 schools in all 50 states and the District of Columbia offered PLTW programs, and more than 2.4 million students were enrolled in PLTW programs. Since it began in 1997, more than 30,000 teachers have been trained across the United States.