Of course, they don’t put their job in such grandiose terms, but two Missouri S&T engineering graduates are playing the long game when it comes to energy use on a global scale. Charles Blaschke and Philip Schloss are two of the founders of Taka Solutions, a technology and energy engineering company based in Dubai, United Arab Emirates — you know, the place where summer highs average about 106 degrees Fahrenheit.

In an extreme environment such as the UAE, a building’s energy consumption is massive, and Taka Solutions has, well, the solution to that problem.

“We use energy technology to help people save energy and reduce their carbon footprint,” says Blaschke, Taka’s managing director and a 2008 mechanical engineering graduate. That mission is reflected in the company’s name, which is derived from taqa, the Arabic word for “energy.”

As an energy savings company, or ESCO, Taka has to make it work because “if we don’t save, we don’t get paid. The building owners don’t have any up-front costs, and in the end they help the environment.”

Conserving the environment by making buildings more energy efficient is only part of their goal. Their ambitious aim is to reduce the world’s energy consumption by 20 percent, but reaching — and teaching — the world’s population takes money. To raise that capital, Taka Solutions is one of 27 start-ups around the world competing in The Venture competition for a share of $1 million in funding available.

The money Taka Solutions receives would go to developing an app that acts as an energy audit report, showing people how much energy they have used and how much they should be using for their house. In that way, it would help people regulate and save on their energy bills. The app would be free, and the energy saved by a million or 100 million people reducing their usage by just 10 percent could be a game-changer for the world.

“We have plans to go global,” Blaschke says.

But that’s not how it started. 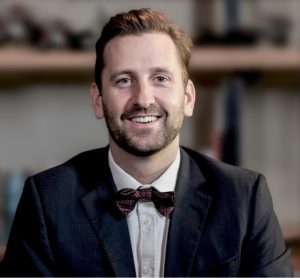 Blaschke and Schrenk worked for Burt Hill in the UAE for about two years. Schrenk returned to the States, but Blaschke went to work for a German engineering firm before starting a technology consulting business.

During Blaschke’s first few years in the UAE, he realized that buildings there were not performing anywhere close to their potential, Schloss says, and saw the need and opportunity for Taka Solutions to provide energy efficiency solutions through the paid-from-savings business model.

“We had frequent, long conversations, and ultimately we committed to forming the company with the seed-stage investment support from a small group of our friends and his family,” Schloss says. “One of the more memorable conversations happened in December 2012 when he (Blaschke) came to visit me in Seattle. For a fun adventure, we decided to hike into a mountain hot spring deep in the Cascades where we camped overnight. It snowed heavily on us, and we sat in the hot spring until the early hours of the morning refining Charles’ business model and the initial concepts. That, to me, was the founding moment. Not long after, Charles quit his job and officially registered the company.”

Schrenk served as an advisor to his friends and helped write the document that became the template for the company’s first energy performance contract. Since then, he has been “involved minimally, like helping to recruit good candidates for the company,” he says.

Blaschke has made the United Arab Emirates his home for the past nine years, getting back to the United States only once or twice a year, usually for a friend’s wedding. And although Taka is a UAE company, its roots are firmly grounded at Missouri S&T.

“It all started because of the bonds we made during our time in the Pike house,” Blaschke says.

For buildings in their shared-savings model, Taka Solutions does all the work, performing a thorough analysis of a building’s energy consumption, from things as simple as lightbulbs to as complex as air conditioning systems. During this phase, they also look at historical energy consumption, create a baseline and identify savings opportunities.

In the implementation stage, they arrange financing, purchase materials and install them, setting the plan in motion. Installation can be simple, from a sensor that automatically shuts off lights when no one is present, to complex energy dashboards and remote reporting.

“Anything that can be used to reduce energy is implemented while keeping it comfortable in the building,” Blaschke says.

In the final stage, they manage the project based on a contract with the building’s owner, verifying savings. And only then do they get paid, taking 60 percent of the energy cost savings.

Blaschke says the seven buildings Taka has retrofitted see energy savings from 20 percent to 40 percent, with an average of 27 percent. The savings per year in some of their projects run into the hundreds of thousands of dollars, with projected 10-year totals into the millions — with millions of kilowatt hours being saved every year.

That’s energy that doesn’t have to be produced. That’s carbon that isn’t released into the atmosphere. That’s the point.

Developing the app and getting it to the world’s people is one prong of Taka’s strategy, but keeping their core building operation is still just as important. It is, after all, a business.

They’re not “tree-hugging hippies,” as Blaschke put it, but they are environmentally aware and invested in helping the world use less energy.

In five years, Blaschke says, he wants Taka to be the premier ESCO in the Persian Gulf region with a solid entry into the U.S. market.

In 10 years, he wants Taka to be a “super-ESCO” that’s gone global.

One thought on “Global challenge”