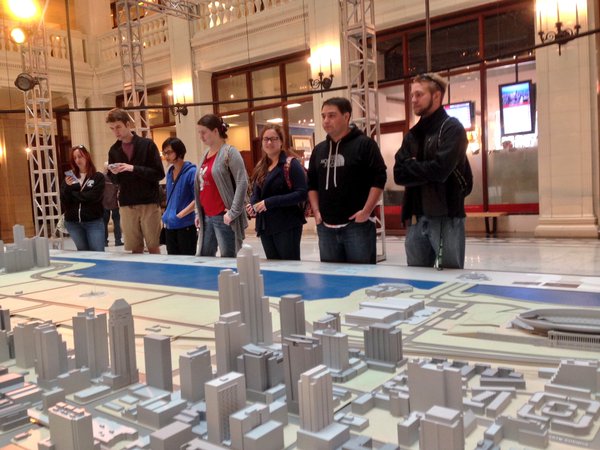 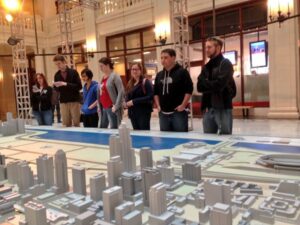 Dr. Jeffrey Schramm, associate professor of history and political science at Missouri University of Science and Technology, is teaching a group of Missouri S&T students about the architectural and socioeconomic history of Chicago while in the city itself.

The course, titled “Chicago: Architecture, Technology and Culture,” began Monday, May 16, and will continue through May 27. During the class, students will explore the history of modern architecture and the connection between architecture and technology, society, economics, politics and culture in the city.

“There is no better city in the world to study the architecture of the past 160 years than Chicago,” says Schramm, a historian of modern technology. “By living downtown in the Loop and through tours to multiple sites, students will come away with a better understanding not only of architectural history, but of the history of modern America and the complex interplay between architecture and modern society.”

Students will visit locations such as the Chicago History Museum, the Frank Lloyd Wright Home, the Pullman neighborhood, the Clarke House, the Hull House Museum and the Farnsworth house. They will lodge at Roosevelt University throughout the course.

Schramm’s research has primarily focused on transportation and 20th century railroads. He is the author of “Out of Steam: Dieselization and American Railroads, 1920-1960” and writes book reviews of works on the subject of transportation and railroads. His current major research project is a history of the scientific and technological research activities of the United States Bureau of Mines.

Schramm graduated from Missouri S&T in 1992 with a degree in history. He earned a master of arts degree and Ph.D. from Lehigh University in Bethlehem, Pennsylvania, in 1995 and 2003, respectively.

On May 18, 2016. Posted in College of Arts, Sciences, and Business, Department of History and Political Science