Note: Archived video footage from May 2016 commencement ceremonies is available for viewing here.

Two Missouri leaders offered words of advice and congratulations to just over 1,200 graduates as part of commencement ceremonies at Missouri University of Science and Technology on Saturday, May 14. 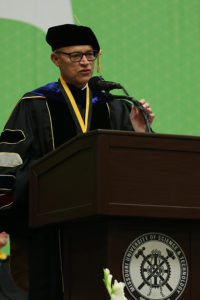 During the first ceremony, Michael A. Middleton, interim president of the University of Missouri System, told the graduates that inspiration comes in all shapes and sizes, and he asked each of them to reflect on where they want to go next.

“Each one of you came to this university with goals, aspirations and dreams for your careers,” Middleton said. “Whether it’s in the science or technological field, mathematics or business, education or philosophy, your opportunities are endless.

“Your hard work at Missouri S&T has established a strong foundation for each of you,” Middleton said. “May you continue on with greatness and pride in the next stages of your journey as you live out the world you truly imagine.” 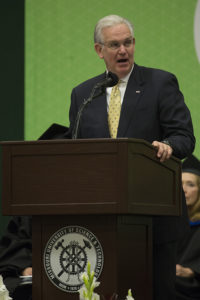 In the second ceremony, Missouri Gov. Jeremiah W. (Jay) Nixon encouraged Missouri S&T graduates to share their knowledge and experience with the people of Missouri.

“Now is the time to take all you have learned here at Missouri S&T and spread your wings, to go out and conquer the world and to get as much experience as you can, wherever the opportunity presents itself,” Nixon said. “But if I’m being completely honest – and I think I speak for many of us here today – we don’t really want you to leave. We need your talent. We need your skills. We need your brainpower.

“When I look at you, I see the innovators and entrepreneurs who will create a vibrant future for the people of our state – and the people of the world,” Nixon said. “Go, if you must. But never forget where you came from. The future is in your hands. Make it bright.”

During the second ceremony, 615 undergraduate engineering degrees were awarded.

Nixon is serving his second term as Missouri’s 55th governor, after first being elected in 2008 and then re-elected in 2012.

As governor, his priorities have included making government more efficient, effective and responsive; attracting the jobs of the future to the Show-Me State; making record investments in education; and placing a college education within reach for all Missouri students. Nixon has worked closely with higher education leaders to keep tuition increases at the state’s universities the lowest in the nation for the past seven years, making college more affordable for Missouri students and their families.

A native of De Soto, Missouri, Nixon was raised in a family of public servants. His mother was a teacher and served as president of the local school board. His father was elected mayor of De Soto and was a judge in the community.

First elected to the Missouri State Senate in 1986 and re-elected in 1990, Nixon was first elected as Missouri attorney general in 1992. He went on to serve as the state’s chief law enforcement officer for a record four terms. As attorney general, he made a name for himself in standing up for Missourians to powerful tobacco and insurance companies, and in protecting consumers and the environment.

Nixon and the first lady, Georganne Wheeler Nixon, have two adult sons, Jeremiah and Will.

Middleton joined the faculty of the MU School of Law in 1985 after an illustrious career with the federal government in Washington, D.C., where he was first a trial attorney in the Civil Rights Division of the U.S. Department of Justice. In 1977, he was appointed assistant deputy director of the Office for Civil Rights within the former U.S. Department of Health, Education, and Welfare.

After serving as director of the Office of Systemic Programs for the Equal Employment Opportunity Commission (EEOC) and as principal deputy assistant secretary for Civil Rights at the U.S. Department of Education, Middleton was appointed associate general counsel of the EEOC’s trial division. He returned to his alma mater from St. Louis, where he was director of the EEOC’s St. Louis District Office.

Beginning in 1997, Middleton served as the interim vice provost for minority affairs and faculty development at MU. A year later, he accepted the position of deputy chancellor, a role he held until his retirement on Aug. 31, 2015.

Middleton earned a bachelor’s degree in political science from MU in 1968. He is a 1971 graduate of the MU School of Law.

He is married to Dr. Julie N. Middleton, who recently retired from serving as director of organizational development and an extension professional at MU. They have three children and seven grandchildren.