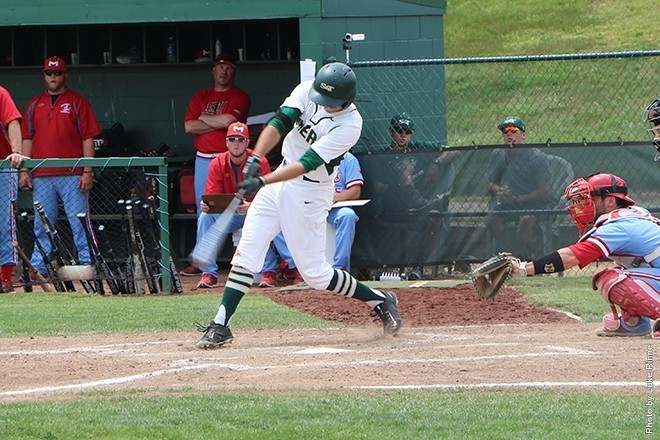 Tyler Bodenstab’s run-scoring single in the first game of Sunday’s doubleheader put the Miners ahead for good in the game that broke the previous single-season record for wins. 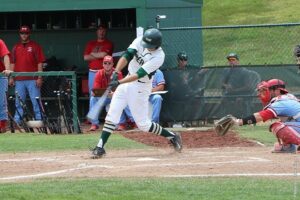 Tyler Bodenstab’s run-scoring single in the first game of Sunday’s doubleheader put the Miners ahead for good in the game that broke the previous single-season record for wins.

Update: The Miners learned on Sunday, May 15, that they will head to the NCAA Division II Tournament for the third time in the team’s history.

Fueled by a pair of come-from-behind victories over Maryville University on Saturday, the Missouri S&T baseball team won two more against Maryville on Sunday, setting a new record for most wins in a regular season and capturing the Great Lakes Valley Conference West Division title.

The Miners won the division championship for the first time since 2012 with the weekend series sweep over the Maryville Saints. They are scheduled to open GLVC tournament play on Thursday, May 12, against the University of Illinois Springfield at Grand Park in Westfield, Indiana.

The Miners enter the tournament with a 34-15 record. Those 34 wins are a new record for S&T baseball, eclipsing the previous record of 32 wins, which was held by the 2012 team, the last one to capture a division title.