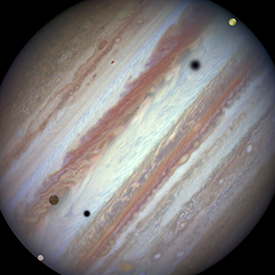 The public is invited to view Jupiter’s moons, Io and Europa, as they cross over the face of Jupiter, through Missouri University of Science and Technology’s 16-inch telescope on March 14.

The Missouri S&T observatory will open its doors at 8:30 p.m. Monday, March 14, which is when Europa begins its transit. The sky must be clear for observing and the session length will vary.

Jupiter is the fifth planet from the sun and the largest in the solar system. A gas giant with a mass one-thousandth that of the sun, Jupiter has 67 known moons. Four of its moons were observed first in 1609 by Galileo Galilei. Two of the four moons Galilei observed were later named Io and Europa.

Europa is the sixth-closest moon to Jupiter. It is mostly made up of silicate rock with a crust of water and ice. Its atmosphere is composed primarily of oxygen.
Io is the closest moon to Jupiter. It is the most geologically active object in the solar system with over 400 active volcanos. Io’s surface is dotted with over 100 mountains, some with peaks higher than Mount Everest.

The next scheduled Visitor’s Night will feature a viewing of the Beehive Cluster on Monday, April 11. All viewings are subject to weather conditions.