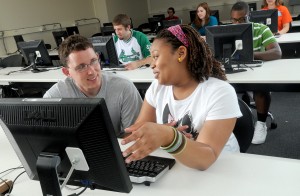 Missouri S&T’s computer science department is hosting a distinguished speakers series with world-renowned experts in the field giving talks March 7 through May 2.

As part of its yearlong Golden Jubilee, Missouri University of Science and Technology’s computer science department is highlighting world-renowned faculty and government and national campus leaders through its Distinguished Colloquium Speaker series.

The series, which runs March 7 to May 2, features six speakers from around the country.

Kicking off the series on Monday, March 7, is “An expanding and expansive view of computing” presented by Dr. James Kurose, assistant director of the National Science Foundation (NSF) for Computer and Information Science and Engineering (CISE) directorate. Kurose is on leave from the University of Massachusetts-Amherst, where he is Distinguished Professor in the College of Information and Computer Sciences.

“Advances in computer and information science and engineering are providing unprecedented opportunities for research and education,” Kurose says. “My talk will begin with an overview of CISE activities and programs at the National Science Foundation and include a discussion of current trends that are shaping the future of our discipline. I will also discuss the opportunities as well as the challenges that lay ahead for our community and for CISE.”

On Thursday, April 7, Dr. Mani Chandy, Simon Ramo Professor emeritus at the California Institute of Technology and a member of the National Academy of Engineering, will present a talk titled “Right-time analytics and networks processes.”

“Analysis of data, as it is being generated, enables timely response,” Chandy says. “Sensors, social media, phones and other devices generate streams of data. ‘Right-time’ analytics extracts the information from data streams that enables effective, timely response. This talk will describe StreamPy, a tool for analyzing data in motion to obtain right-time analytics.”

“Over the past decade, the participation of females in the tech industry has declined rather than advanced,” Klawe says. “This is unfortunate for young women because of the incredible career opportunities; for the tech industry because of the loss of incoming talent; and for society because of the loss of diversity of perspective among tech teams. I will talk about how we can improve the situation and how Harvey Mudd College dramatically increased the number of females majoring in computer science, from 10 percent of the majors to over 40 percent.”

“Klawe initiated the BRAID initiative — Building, Recruiting And Inclusion for Diversity — of which S&T is a part,” Das says. “Missouri S&T has received a three-year grant from BRAID that is helping us build a community of women and minority students in computer science and sending a large number of them to the annual Grace Hopper Conference on Women in Computing. Such efforts have resulted in more than a 20 percent increase in female student enrollment in computer science in the last two years.”

Other speakers in the series are Dr. Rao Kosaraju, Edward J. Shaefer Professor at Johns Hopkins University and division director of the computer and communications foundation at NSF/CISE. He will speak Monday, April 11, on “Basic research can pay off big — a network design example.”

And on Monday, May 2, Dr. Rajesh Gupta, Qualcom Professor in Computer Science and Engineering at the University of California-San Diego, will present “Building computing machines that sense, adapt and approximate.”

On February 12, 2016. Posted in College of Engineering and Computing, Computer Science, Events, Featured