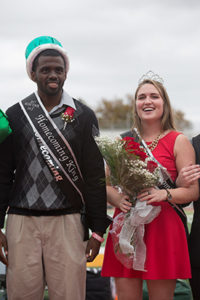 Missouri University of Science and Technology crowned the 2015 Homecoming Queen and King at halftime of the Oct. 24 football game between Missouri S&T and McKendree University.

Haley Witcher, a senior in chemical engineering from Sedalia, Missouri, was named Missouri S&T’s 2015 Homecoming Queen. She was nominated by Chi Omega. Stanley “Charlie” Brown, a senior in mechanical engineering from Springfield, Illinois, was named Missouri S&T’s 2015 Homecoming King. He was nominated by Kappa Delta.