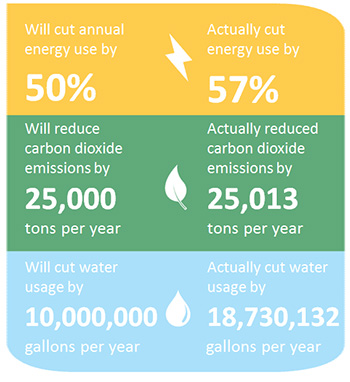 As the first year of operation closes for Missouri University of Science and Technology’s geothermal energy system, university officials announce that the system has exceeded its projected campus impact.

“The results confirm that the system works as designed and will pay for itself over time from budgeted savings,” says James Packard, director of facilities operations at Missouri S&T. “This project and follow-on projects eliminated over $60 million in deferred maintenance, a more than 25 percent reduction in the $220 million deferred maintenance backlog the campus had before the project began.”

The geothermal system was expected to cut the university’s annual energy use by 50 percent. At the end of the first year of operation, Missouri S&T saw a reduction of 57 percent in energy use.

The university expected to reduce its carbon footprint by 25,000 tons per year, and Missouri S&T exceeded that goal by 13 tons. That reduction amounts to roughly the equivalent of the greenhouse gas emissions of 4,600 passenger vehicles a year.

Missouri S&T broke ground on the geothermal energy project in 2012. It consists of 789 wells that are 400-440 feet deep. Those wells supply three regional plants, each with 500-ton capacity, plus a geothermal system for the Gale Bullman Building. It involved a complete reconstruction of the campus chilled water system and required the placement – or replacement – of 125 miles of pipe in the ground.

As part of this, nearly a mile of domestic water mains were replaced, which Packard believes eliminated underground leaks, and boosted the overall water savings for the last year to 30 million gallons, or over 35 percent of the campus use.