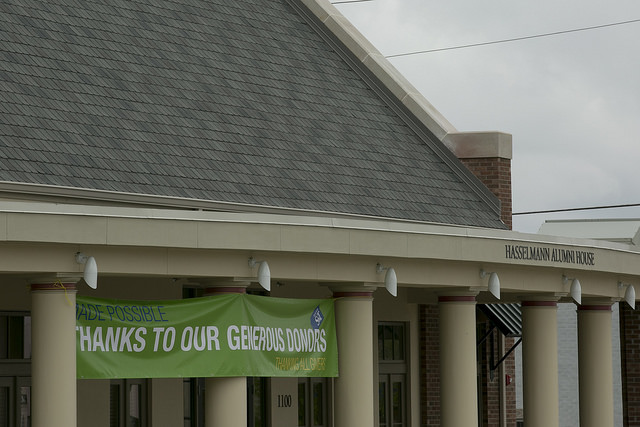 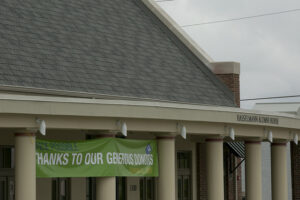 Completion of Hasselmann Alumni House — which was funded through private gifts — was a major milestone during the 2014-2015 fiscal year.

For the second year in a row, Missouri University of Science and Technology saw an increase in charitable contributions as well as total number of gifts and pledges. Missouri S&T received $13.9 million in gifts and pledges during the fiscal year that ended June 30, an increase over the $13.8 million received during the 2013-2014 fiscal year and a 37.6 percent increase over the $10.1 million received two years ago.

The contributions from alumni and friends, corporations, foundations and other sources provide funding for student scholarships, labs and classrooms, faculty support, academic and extracurricular programs, athletics, public radio KMST, and other funding priorities.

Among the highlights of the past fiscal year’s fundraising efforts was the launch of a crowdfunding website to meet specific, short-term fundraising goals. The online effort – crowdfunding.mst.edu – was launched in April as part of Missouri S&T’s Philanthropy Month activities. Through the site, donors have helped fund two Missouri S&T student design teams – the Mars Rover Design Team and the High Powered Engineered Rocket Team – in their efforts to attend national and international design competitions. More crowdfunding projects will be announced soon.

Another major fundraising project during the past year involved raising funds to furnish Hasselmann Alumni House on 11th and Pine streets in downtown Rolla. The building, which opened in March, houses Missouri S&T’s alumni and donor relations staff and serves as the hub for Miner Alumni Association activities during Homecoming, the St. Pat’s Celebration and other occasions. Hasselmann Alumni House will also be available to the Rolla community for meetings and events.

The university also completed an initiative to raise funds for instructional laboratories. The private gifts were matched with funds from the state and the university to upgrade and provide new instrumentation for 11 labs. A dedication ceremony for the upgraded labs was held in April as part of Philanthropy Month.

“The charitable investment of our loyal alumni, friends and corporate partners is crucial to our continued success as a leading research university,” says Missouri S&T Chancellor Cheryl B. Schrader. “Our donors understand that Missouri S&T provides an exceptional return on investment and is a valued partner to many for education, innovation and economic development. We are grateful that so many alumni and friends contribute each year to ensure that our university’s tradition of academic excellence will endure.”