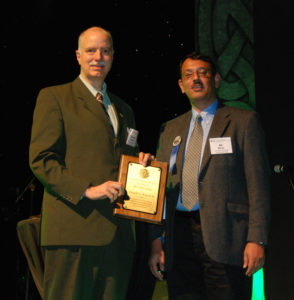 The award, conferred at most once annually, recognizes achievement in engineering applications of neural nets. It was presented at the banquet of the society’s flagship conference, the IEEE / INNS International Joint Conference on Neural Networks, in Dublin.

“The award is meaningful to me because of the great mentors who made this possible and the great students and collaborators who made the journey so enjoyable,” says Wunsch, who is also director of the Applied Computational Intelligence Lab at Missouri S&T. “Professionally it is great visibility for me and for our university.”

The INNS supports activities that advance the world’s understanding of how mental functions such as perception, cognition, decision-making, memory and motor control emerge from the nervous system, and to use this understanding to build smarter machines and algorithms for applications across all disciplines.

The INNS is the premier professional society for researchers across the world who are working on neural networks and related areas such as big data, machine learning, computational neuroscience, neuroinformatics and cognitive science. Researchers in the fields of artificial intelligence, robotics, computational biology and biomorphic systems are also included.

Wunsch is a previous INNS president, INNS Fellow and Senior Fellow and served as the International Joint Conference on Neural Networks general chair. Wunsch also is an Institute of Electrical and Electronics Engineers (IEEE) Fellow and has served on several boards, including the IEEE Neural Net Council and the University of Missouri Bioinformatics Consortium. He is the former chair of the Missouri S&T Information Technology and Computing Committee, a Faculty Senate standing committee.

On July 24, 2015. Posted in Electrical and Computer Engineering, Featured, People