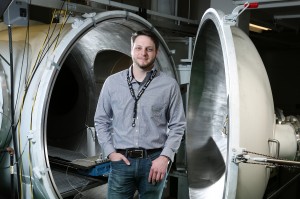 This program’s goal is to create innovative new technologies to benefit space exploration and the understanding of space.

Glascock’s research involves testing microthrusters that can be integrated into small satellites to maneuver them, a feature the spacecrafts have lacked. Most of the research will be done in the aerospace plasma (AP) laboratory at Missouri S&T, but he also will visit NASA’s Marshall Space Flight Center, Glenn Research Center, the Jet Propulsion Laboratory and to Reno, Nevada, with Digital Solid State Propulsion (DSSP).

As an undergraduate, Glascock worked with Dr. Joshua Rovey, associate professor of mechanical and aerospace engineering at Missouri S&T, on a NASA Innovative Advanced Concepts project (NIAC). After graduating, he worked at NASA’s Marshall Space Flight Center on a summer internship.

When he returned to Missouri S&T, Glascock — who earned a bachelor of science degree in aerospace engineering from Missouri S&T in 2014 — entered the Ph.D. program and worked with Rovey, who is partnering with DSSP. This summer, Glascock has an internship at DSSP.

The three- to four-year NASA Fellowship starts this fall. The fellowship covers all tuition and fees along with a stipend. Glascock will work on the characterization of DSSP’s Electric Solid Propellant Microthrusters. His work will lead to thrust measurements and in-depth development of these thrusters as a new technology for spacecraft propulsion.

After graduating with his Ph.D., Glascock hopes to continue space propulsion technology research in the field, either with NASA or with DSSP.