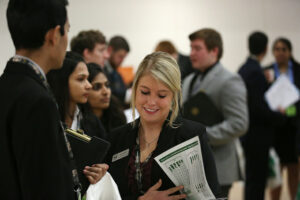 A student at Missouri S&T’s Spring 2015 Career Fair. Each semester, hundreds of employers flock to campus to hire S&T students of all majors.

Missouri University of Science and Technology is one of the nation’s best universities in terms of “value added,” according to a new report published by a unit of the Brookings Institution.

The report draws on government and private sources to analyze colleges and universities in terms of “the difference between actual alumni outcomes (like salaries) and the outcomes one would expect given a student’s characteristics and type of institution.” The study is designed to assess how well colleges and universities contribute to their graduates’ economic success.

Missouri S&T is the top-rated four-year institution in Missouri by the report’s measures, and is on a par with other top technological research universities in the U.S.

“Value-added captures the benefits that accrue from aspects of college quality we can measure, such as graduation rates and the market value of the skills a college teaches, as well as aspects we can’t,” report authors Jonathan Rothwell and Siddharth Kulkarni write.

The report, titled “Beyond College Rankings: A Value-Added Approach to Assessing Two- and Four-Year Schools,” was published today (Wednesday, April 29, 2015) by the Metropolitan Policy Program on the Brookings Institution website.

Using a variety of private and public data sources, Brookings’ Metropolitan Policy Program developed a method to measure three outcomes related to a college graduate’s career: mid-career earnings, occupational earnings power and loan repayment rate. Each of these outcomes was measured on a 100-point scale.

Missouri S&T received a rating of 98 for mid-career earnings, 100 for occupational earnings power and 96 for loan repayment rate. At the top of the rankings was Massachusetts Institute of Technology, which received ratings of 100, 99 and 99.

Missouri S&T received the highest rankings of any Missouri college or university.

According to the Brookings Institution report, five college quality factors seem to indicate how well students perform economically after college. They are:

These value-added measures more accurately predict the economic outcomes for students, say the report’s authors. “The data contained in this report can provide a starting point for investigating a college’s strengths and weaknesses with respect to career preparation,” they write. The authors add that students should also consider cost of attendance, scholarship opportunities, the availability of degree programs and other factors.