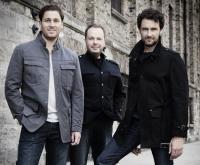 The Celtic Tenors, a world-renowned vocal group, will perform a holiday show at Missouri University of Science and Technology this December. It is the third performance in the 2014-15 Missouri S&T Campus Performing Arts Series.

The group will perform a combination of classical, folk, Irish, pop music and a variety of holiday music during a concert at 7:30 p.m. Thursday, Dec. 4, in Leach Theatre of Castleman Hall, 10th and Main streets in Rolla.

Tickets are $35 for adults and $28 for youth age 18 and younger. Tickets are available to Missouri S&T students with a valid ID for $15. However, the first 75 students will receive a free ticket. Tickets can be purchased 9 a.m. to 4 p.m. Monday through Friday from the Leach Theatre Box Office, located in the vestibule inside the main entrance to Leach Theatre, facing 10th Street. Tickets can also be purchased at leachtheatre.mst.edu/cpas/14-15/celtictenors/.

The Celtic Tenors, founded in 1995, has sold over a million albums wordwide.  The group has held No. 1 chart positions in Ireland and Germany and has made it to the Top 10 U.S. Billboard and Canadian Charts. The group has also performed for former President Bill Clinton and other world leaders.