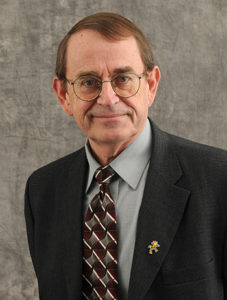 Dr. Larry Gragg, Curators’ Teaching Professor and chair of history and political science at Missouri University of Science and Technology, has been named a finalist for the 2014 Spur Award for his book about Las Vegas.

The Spur Awards are bestowed through Western Writers of America Inc. and were awarded in 15 different categories this year. Founded in 1953, the organization is comprised of over 650 members who write about the American West in genres ranging from poems and songs to local histories and mainstream fiction.

The University Press of Kansas published Gragg’s book in 2013. Bright Light City: Las Vegas in Popular Culture examines the ways the city is depicted in television, movies, the media and popular fiction. It is the first in a planned four-book series.

In his research for the book, Gragg examined 150 films, 200 television programs, 200 novels, nearly 1,500 newspaper articles and over 200 magazine articles. He also used his experiences from over 50 trips to Las Vegas since 1992 to write the book.

Gragg found several themes in his research of Las Vegas in popular culture. Those themes became the chapters of the book. He looks at Las Vegas as the last frontier town, a home for gangsters, the entertainment center of the world, a gambling hot spot and place to find luxury and beautiful women.

“It is critical to know what images of Las Vegas Americans encountered in the nation’s popular culture that fueled their fascination with a city they had never visited,” Gragg says. “The prevailing images clearly emerge as a kaleidoscope of impressions of lights, color and sound; characters and characterizations; and praise and criticism – and, ultimately, amazement about the city that has attracted ever more people.”

The next book in the series, Benjamin ‘Bugsy’ Siegel: The Gangster, The Flamingo, and The Making of Modern Las Vegas, will be published in early 2015. In addition to his research on Las Vegas, Gragg has authored six American history books on topics ranging from the Salem witch trials to the English colonization of Barbados.

On November 6, 2014. Posted in College of Arts, Sciences, and Business, Department of History and Political Science, Featured, People, University News