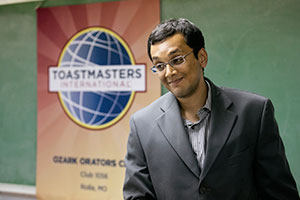 Sudharshan Anandan, a Ph.D. student in aerospace engineering, will compete for the title of World Champion of Public Speaking at the Toastmasters International convention.

Sudharshan Anandan, a Ph.D. student in aerospace engineering, will compete for the title of World Champion of Public Speaking at the Toastmasters International convention.

Update, Friday, Aug. 22, 2014: Sudharshan Anandan finished third in the semi-final round of the international competition.

When Sudharshan Anandan first arrived in Rolla, Missouri, from his native India in 2012, the Ph.D. student at Missouri University of Science and Technology struggled with the English language. “When I first got here, it took more than 15 minutes just to order a sandwich at Subway,” he says.

Now Anandan will soon address an audience of thousands – including his mother – during the 83rd annual Toastmasters International convention in Kuala Lumpur, Malaysia. He is one of 80-plus Toastmasters members from around the world who will compete for the title of World Champion of Public Speaking during the convention, which will be held Aug. 20-23. And the native of Bengaluru, India, will deliver his speech in English.

Anandan is now president of Ozark Orators, a local chapter of the public speaking organization Toastmasters International. He credits the local group for helping him improve his English and become more confident while speaking before a group.

Anandan joined the group soon after arriving in Rolla. Now he meets with his fellow Toastmasters every Tuesday night to deliver speeches as well as share and receive constructive critiques. “For a year I just practiced speaking correctly” during club meetings, he says. “I had a serious problem with nervousness while speaking in front of people. I would have a death grip on the lectern.”

Sudharshan Anandan’s District 8 humorous speech, “Messed Up,” launched him on the path to the World Championship of Public Speaking.

But week after week, meeting after meeting, Anandan’s speaking and presentation skills improved. He stopped clutching the podium and learned to hide his fear of public speaking.

“The regular practice has given me confidence,” he says, “And the critiques by fellow Toastmasters are always constructive.”

Whether he wins or loses in Kuala Lumpur, Anandan says he values the experience – and the free flight tickets – Toastmasters has provided. In addition to the practical training in public speaking he’s acquired, Anandan says that the club serves as a close-knit social group.

His Ozark Orators colleagues agree. “Sudharshan has been a wonderful addition to Ozarks Orators,” says Jean Craft, a lecturer in Missouri S&T’s international affairs office and Ozark Orators’ vice president of public relations. “In addition to being an inspirational speaker, he is one of our best speech evaluators. He has mastered the art of providing constructive criticism without discouraging the speaker, and he has been a great spokesperson for Toastmasters by inviting many of his friends to our meetings.”

Now a graduate research assistant working with Dr. K. Chandrashekhara, Curators’ Professor of mechanical and aerospace engineering at Missouri S&T, Anandan also puts his Toastmasters training to use for academic purposes, such as when he prepares for conference presentations about his research in high-temperature composite materials.

“I’ve learned to stick to the point and reduce the number of slides in my presentation,” he says. “I have also learned to manage my time and respond to questions off-the-cuff.”

Although he’s “extremely nervous” about speaking at the international event – it will be the first time his mother will watch her son deliver a speech – Anandan says he is grateful for the opportunity and for the support he has received from Ozark Orators.

Ozark Orators is one of two Toastmasters groups in Rolla. The other, Missouri S&T Toastmasters Club, is a student organization of the university.