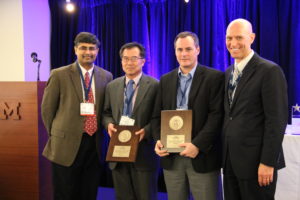 Mingyang Li, a current Ph.D. student, and Lie Tang, a recently graduated Ph.D. student, both in mechanical engineering at Missouri S&T, and their faculty advisors, Dr. Robert G. Landers and Dr. Ming Leu, received the 2014 ASME Blackall Machine Tool and Gage Award for a two-part paper describing the research. The four received the award on June 11 during the 2014 ASME International Manufacturing Science and Engineering Conference in Detroit, Michigan.

The award is presented annually for the most outstanding paper published in the ASME’s Journal of Manufacturing Science and Engineering during the preceding two years. The Missouri S&T researchers’ two-part paper describes a mathematical model for fabricating ceramic parts known as “freeze-form extrusion fabrication,” as well as experimental verification of the model.

The process involves mixing ceramic materials with water to create a paste that is then extruded to form manufactured parts. This approach is an additive manufacturing method, which is known broadly as “3-D printing,” because it creates parts layer by layer.

Ceramic materials are widely used in the automotive and aerospace industries because of their hardness and heat-resistance capabilities, the researchers write in their paper, “Extrusion Process Modeling for Aqueous-Based Ceramic Pastes – Part 1: Constitutive Model and Part 2: Experimental Verification.” Both parts of the paper were published in the October 2013 issue of ASME’s Journal of Manufacturing Science and Engineering (part 1) (part 2).

Landers is a professor of mechanical engineering and associate chair for graduate affairs. Leu is the Keith and Pat Bailey Missouri Distinguished Professor of Integrated Product Manufacturing. He also leads the Advanced Manufacturing signature area, one of four leading research efforts at Missouri S&T that were announced earlier this year.