Two members of the Missouri University of Science and Technology chemistry faculty have been chosen to receive President’s Awards, the highest honor bestowed by the University of Missouri System, for excellence among the university’s four mission areas of teaching, research, service and economic development. In all, 11 awards will be presented this year. 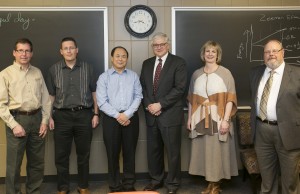 Hank Foley, executive vice president for academic affairs at the UM System, presented the awards on Wednesday, April 9. Foley, accompanied by faculty, administrators and staff, surprised the recipients. They will be honored at an event in Columbia, Mo., on June 19 with the University of Missouri Board of Curators.

Winners from Missouri S&T include:

Dr. Richard Dawes, assistant professor of chemistry at Missouri S&T, recipient of the President’s Award for Early Career Excellence, which includes a $5,000 award. The award recognizes faculty who exhibit exceptional promise within their first seven years with the university as demonstrated through scholarship, research or creativity.

Dawes has the scholastic reputation of a seasoned researcher in his field. An internationally known scholar, he works in a theoretical field of chemistry that is concerned with molecular structures and reactivity, which affects factors like the efficiency of combustion engines and air pollution.

Dawes has received an impressive amount of external grant funding, especially for a theoretical chemist. He has secured more than $1.1 million for research from federally funded programs, including the National Science Foundation. He was also the recipient of 2013 Early Career Award from the U.S. Department of Energy, the first scientist in Missouri to do so. Dawes’ achievements in these areas are helping establish Missouri S&T in the field of computational chemistry.

Dawes’ research has been well received by the academic community. Since joining Missouri S&T three years ago, he has published 26 peer-reviewed papers, one of which was the second-most cited paper in the Journal of Chemical Physics in 2012. Dawes also speaks regularly at scientific workshops on the atmospheric dynamics of ozone.

As a teacher, mentor and faculty member, Dawes contributes significantly to the Missouri S&T campus. He teaches four different courses, oversees undergraduate, graduate and doctoral student research and serves on several faculty committees for the university. Dawes has earned a perfect 4.0 teaching evaluation twice and was named the recipient of the Wilbur Tappmeyer Excellence in Undergraduate Teaching Award in 2013.

“I consider Dr. Dawes a most remarkable academic citizen, an outstanding teacher and a top internationally renowned researcher,” wrote one nominator. “While these attributes are most often only used for older, well-situated researchers, I believe that Richard Dawes has already reached this prominent status within the short time of his university career.”

Dr. Yinfa Ma, Curators’ Teaching Professor of chemistry at Missouri S&T, recipient of the President’s Award for Mentoring, which includes a $5,000 award. The award recognizes faculty who have provided exemplary mentoring to fellow faculty members within the university.

Ma mentors the next generation of chemists and professors. Undergraduate students, doctoral candidates and associate professors all have stories of how Ma’s mentorship formed the basis of their future successes.

A native of rural China, Ma is an expert at helping young, non-native science professors create an engaging classroom environment. Ma is known for observing classes of budding professors and later sharing notes on how they can more effectively teach and engage all the students in their class. Ma’s own passionate teaching style — focused on practical demonstration and meaningful participation — has earned him several teaching awards, including designation as a Curators’ Teaching Professor.

“His kind and gentle manner puts students at ease to the point that the students are not even aware that they are learning,” one nominator wrote.  “Yinfa’s classes are a pleasant experience for all. There is laughter in his classrooms and research labs while learning and conquering difficult tasks.”

In addition to mentoring fellow faculty, Ma also takes a vested interest in mentoring graduate students, especially those who may want to take professorships. His teaching assistants study his effective teaching style while developing their own unique style. He challenges his graduate students to pursue creative approaches to their research and encourages them to present their findings as often as possible. Beneficiaries of Ma’s mentorship praise his interest in their personal lives as well.

Ma’s passion for his field and for mentoring has supported the careers of many of his colleagues as well as students, whether it is for continued research or teaching.