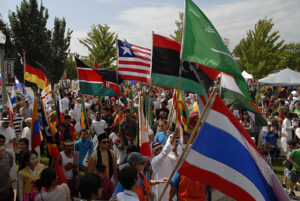 Missouri University of Science and Technology will celebrate the 20th anniversary of its Applied Language Institute with a reception from 3:30-4:30 p.m. Thursday, March 6, at the Southwestern Bell Cultural Center, 1207 N. Elm St. in Rolla. The event is free and open to the public.

The Applied Language Institute was created to meet the language needs of Missouri S&T’s international community. It operates the university’s Intensive English Program, which helps international students become proficient in English so they can meet language standards and successfully transition to academic life.

“ALI taught me to speak out and never to be afraid of making mistakes, which gave me confidence and helped me enjoy mingling with people from difference cultures and backgrounds,” says Mohammad Aljarallah, a 2011 graduate in petroleum engineering from Kuwait.

Eunice French, then-director of international programs, received approval in August 1993 to establish an Intensive English Program on campus. Soon after, 17 graduate students from Turkey arrived and enrolled in the comprehensive program.

“Dr. Greg Stratman was academic coordinator at the time, with a teaching team that included Pat Stewart and Hester Wise,” says Roberta Morgan, program director of ALI. “Under the leadership of our director, Dr. Jeanie Hofer, the program has continued to grow.”

“In the past 20 years we’ve worked with more than 1,100 students from nearly 70 countries,” says Morgan. “In addition to student enrollment, the Applied Language Institute has taken leadership for public programs such as Celebration of Nations, Conversation Partners and International Friends.”