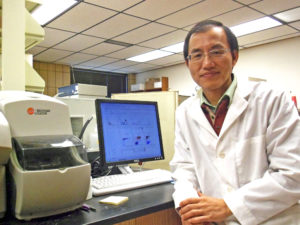 Nanoparticles are used in all kinds of applications — electronics, medicine, cosmetics, even environmental clean-ups. More than 2,800 commercially available applications are now based on nanoparticles, and by 2017, the field is expected to bring in nearly $50 billion worldwide.

But this influx of nanotechnology is not without risks, say researchers at Missouri University of Science and Technology.

“There is an urgent need to investigate the potential impact of nanoparticles on health and the environment,” says Yue-Wern Huang, professor of biological sciences at Missouri S&T.

Huang and his colleagues have been systematically studying the effects of transition metal oxide nanoparticles on human lung cells. These nanoparticles are used extensively in optical and recording devices, water purification systems, cosmetics and skin care products, and targeted drug delivery, among other applications.

“In their typical coarse powder form, the toxicity of these substances is not dramatic,” says Huang. “But as nanoparticles with diameters of only 16-80 nanometers, the situation changes significantly.”

The researchers exposed both healthy and cancerous human lung cells to nanoparticles composed of titanium, chromium, manganese, iron, nickel, copper and zinc compounds — transition metal oxides that are on the fourth row of the periodic table. The researchers discovered that the nanoparticles’ toxicity to the cells, or cytotoxicity, increased as they moved right on the periodic table.

“About 80 percent of the cells died in the presence of nanoparticles of copper oxide and zinc oxide,” says Huang. “These nanoparticles penetrated the cells and destroyed their membranes. The toxic effects are related to the nanoparticles’ surface electrical charge and available docking sites.”

Huang is now working on new research that may help reduce nanoparticles’ toxicity and shed light on how nanoparticles interact with cells.

The researchers’ findings, “Cytotoxicity in the age of nano: The role of fourth period transition metal oxide nanoparticle physicochemical properties,” were published in the Nov. 25, 2013, issue of the journal Chemico-Biological Interactions.

The research was also covered by the German news agency Wissenschaft aktuell.

2 thoughts on “Lungs may suffer when certain elements go nano”