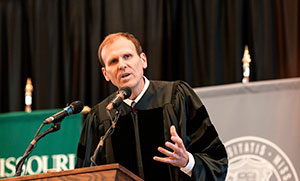 Let your passion lead you to address “the world’s greatest needs,” the co-founder of Kansas City, Mo., based Water.org, which helps people in developing nations gain access to safe water and sanitation, told graduates of Missouri University of Science and Technology.

White, who co-founded Water.org with actor Matt Damon, discussed his journey as a social entrepreneur and the relevance of his journey to graduates of today.

“Your life should be about finding the intersection of your greatest passion and the world’s greatest needs,” White told the graduates.

During commencement, White was awarded the doctor of engineering degree, honoris causa. He earned bachelor of science and master of science degrees in civil engineering from Missouri S&T in 1985 and 1987, respectively.

White also holds a master of science degree in environmental engineering from the University of North Carolina at Chapel Hill.