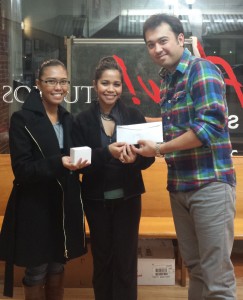 Members of the Turkish Student Association at Missouri University of Science and Technology raised $360 for victims of the typhoon that hit the Philippines on Nov. 8. The funds were raised in less than one hour during a benefit concert that was held on Monday, Dec. 2, in the Havener Center. Performers in the concert included Richie Myers of the international affairs office, and Luce Myers of the arts, languages and philosophy department.