Wireless networks are becoming the standard form of Internet connection in American households. While wireless communication can be easier to install and more convenient to access than wired connections, secure data transmission is harder to ensure. 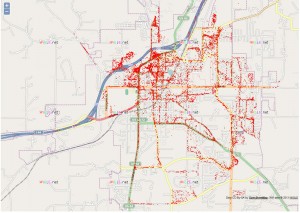 Map of a wireless audit of Rolla completed by Missouri S&T students.

Students from Missouri University of Science and Technology with an interest in Internet security recently performed a wireless audit of Rolla. The Missouri S&T chapter of the Association for Computing Machinery Special Interest Group Security (SIG-Security) performs this annual audit to expose the proportion of networks in the area that are secure, and those that aren’t.

The audit is both educational and competitive. SIG-Security members are divided into teams with a driver and up to three additional members. Each team constructs a “cantenna,” a handcrafted antenna that is made from a can and is attached to a laptop with software to collect the wireless network data and GPS location.

During the competition, teams drive around Rolla for one hour with their “cantennas” to locate as many wireless networks as they can. SIG-Security officers gather the collected data and analyze it to determine the winners. Points are assigned based on the number of networks found — networks discovered by fewer teams earn more points. No identifiable information is kept about the networks, only the security status and location are stored for each access point found. 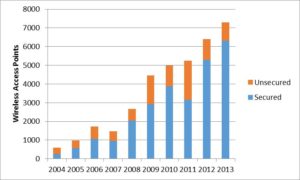 Comparison to past number of access points and proportion of unsecured to secured networks.

The group found that the proportion of secured wireless access points in Rolla has nearly doubled since 2004, from 44 to 86 percent. This is attributed to more routers with default security enabled and the population’s increased awareness of the importance of secure Internet connections.

SIG-Security uses demonstrations and guest speakers to educate students on a variety of security topics, including attacking private networks, defending power grids, compromising hardware and social engineering. Its mission is to prepare the next generation of system and software developers in the interest of ensuring a safer future.