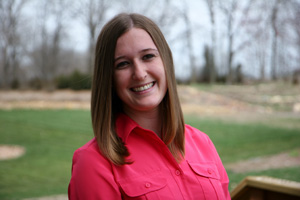 Erin M. Kirchmeier of Kansas City, Mo., a senior aerospace engineering major at Missouri University of Science and Technology, is one of nine women who will be recognized later this month for their contributions to the advancement of women in the aerospace field.

Kirchmeier was one of two students to receive the Women in Aerospace Foundation Scholarship, a $2,000 award to be applied during the current academic year.

She is a member of the Missouri S&T Satellite Team, which designs and builds miniature satellites for the U.S. Air Force Research Laboratory’s Nanosat-7 competition. The microsatellites are designed to launch as a single unit, then separate once in orbit and maintain a specific flight formation. Kirchmeier is the team’s lead of the structures subsystem.

A member of Zeta Tau Alpha at Missouri S&T, Kirchmeier also helped develop a stereoscopic imaging system for the satellite project through the campus’s Opportunities for Undergraduate Research Experiences program. She worked with Dr. Hank Pernicka, associate professor of mechanical and aerospace engineering, on the project during the 2012-2013 academic year.