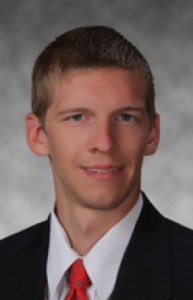 Andrew Brune of St. Charles, Mo., a Ph.D. student in aerospace engineering at Missouri University of Science and Technology, is one of 65 graduate students in the United States to be named a NASA Space Technology Research Fellow for 2013.

NASA awards the fellowships to graduate students who are conducting research relevant to NASA’s technological challenges. Brune is developing methods to help NASA designers and engineers more accurately predict the effects of hypersonic flows on spacecraft during planetary entry. He is working with Dr. Serhat Hosder, associate professor of aerospace engineering at Missouri S&T.

Brune’s research centers on enhancing the accuracy of the design of a new technology called hypersonic inflatable atmospheric decelerators, or HIADs. NASA is developing the technology to slow down spacecraft for safe landing when they enter a planet’s atmosphere at extremely high speeds. 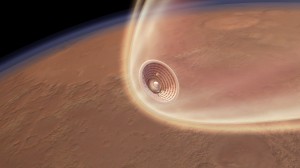 NASA depiction of a hypersonic inflatable atmospheric decelerator (HIAD). HIADs are designed to slow down spacecraft as they enter a planet’s atmosphere. (Image courtesy of NASA.)

“This technology will be especially important for placing large payloads on Mars in future missions, as well as the earth re-entry of future spacecraft” Hosder says.

Details of Brune’s research are available on the NASA website.

During summers, Brune will continue his research at NASA’s Langley Research Center. The project will also involve close collaboration with a NASA mentor at the center, Hosder says.

“NASA’s space technology development and innovation pipeline sees a natural on-ramp for new ideas coming from America’s graduate researcher community,” says Michael Gazarik, NASA’s associate administrator for space technology. “By partnering with and investing in America’s brightest minds, we are guaranteeing a great future for NASA and the nation. These technology research efforts will bolster America’s competitiveness in a knowledge-based, global technology economy while enabling our space exploration goals.”

The fellowship award is intended for three years with renewal every year. The award includes stipend, tuition allowance, faculty advisor allowance and on-site NASA Center experience allowance for the student each year.

According to Hosder, Brune is the first student from a Missouri university to ever receive the fellowship, which was established in 2011.