3OH!3 to perform at Missouri S&T

Posted by Peter Ehrhard
On September 6, 2013 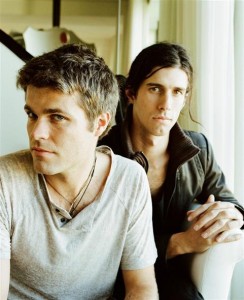 Electropop group 3OH!3 will perform in concert at Missouri University of Science and Technology this month. The duo, made up of Nathaniel Motte and Sean Foreman, was nominated for “Best New Artist” at the 2009 Video Music Awards.

The concert will be held at 5:30 p.m. Saturday, Sept. 28, in the Gale Bullman Multi-Purpose Building. Tickets are $15 for current S&T students and $25 for public admission. Tickets may be purchased from MSTtickets.com and the Leach Theatre Box Office, as well as 10 a.m.-2 p.m. Monday through Friday in the Havener Center atrium. Service fees will apply online and at Leach Theatre. Questions can be sent to concerts@mst.edu.

Formed in 2004, the band named its group after its home city’s area code in Boulder, Colo. The group’s name is pronounced “three oh three,” which also happens to be the name of the duo’s first album, released in 2007. They have appeared multiple times on late night television, including Jimmy Kimmel Live and Last Call with Carson Daly.

3OH!3 are best known for the single “Don’t Trust Me,” which reached number seven on the Billboard Hot 100. The group’s second single, a remix of “Starstrukk” with Katy Perry, was a top 10 hit in the United Kingdom, Ireland, Finland, Poland and Australia.

The performance is presented by the S&T Student Union Board (SUB). SUB, the primary programming resource for students at Missouri S&T, provides students with fun events from professional comedians to movies to full-fledged concerts by groups like Three Days Grace and Switchfoot. Visit SUB’s website at sub.mst.edu to learn more about upcoming events.