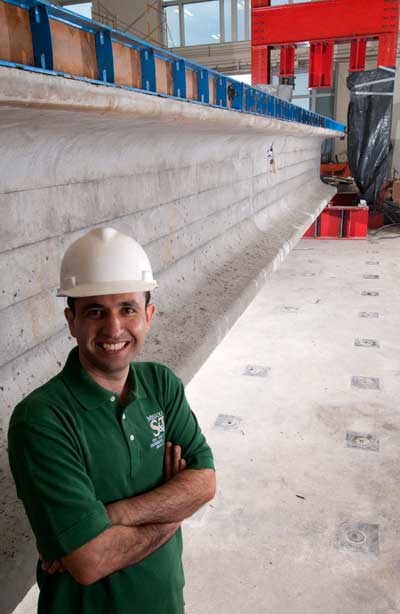 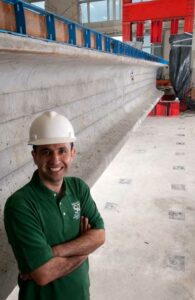 Mahdi Arezoumandi, a doctoral student in civil engineering at Missouri University of Science and Technology, has received international recognition for his research to improve bridge safety by using a stronger, more environmentally friendly concrete in modern bridge construction.

Arezoumandi received the 2013 Nevada Medal for the Distinguished Graduate Student Paper in Bridge Engineering from the University of Nevada, Reno. The award carries a $1,500 prize and includes publication in several professional journals.

Fly ash, a by-product of coal-fired power plants, has been used in concrete for decades, but conventional mixes call for 25 percent of the product. Arezoumandi studied the use of higher volumes of fly ash – between 50 and 70 percent – and found that the resulting concrete showed comparable or higher shear strengths.

Increasing the volume of fly ash in concrete will also allow for the reduction of Portland cement, the active ingredient in concrete, which generates a significant amount of carbon dioxide, Arezoumandi says.

“Not only does the fly ash improve the concrete, but its increased use will also remove a significant amount of material from the solid waste stream,” he says.

The Nevada Medal, which has been given since 2001, recognizes outstanding graduate student contributions to state-of-the-art bridge engineering. The award is funded through an endowment established by Simon Wong Engineering of San Diego. Wong earned bachelor of science and master of science degrees in civil engineering at the University of Nevada, Reno.

Paper submissions were evaluated by a group of experts in bridge engineering research and design.