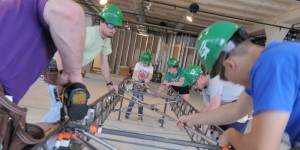 A team of students from Missouri University of Science and Technology won second place at the American Society of Civil Engineers’ Mid-Continent Student Conference and secured entrance to the national competition in Seattle.

The 2013 National Student Steel Bridge Competition will be held Friday, May 31, through Saturday, June 1, at the University of Washington in Seattle. Missouri S&T’s Steel Bridge Team will compete with other collegiate teams from around the nation to construct its bridge as fast as possible. To qualify for the national competition, the students built their bridge in 11 minutes, 6 seconds at the regional event, with 2 minutes, 30 seconds of penalties.

The group is judged on bridge weight, construction speed and rigidity. Penalties are assessed for infractions ranging from dropping bolts, holding two pieces of the bridge at once and stepping over designated lines.

This year, the team’s bridge weighs 155 pounds and has 44 pieces. The back span is 12 feet long and the cantilever is 3.5 feet long. The group spent all of the fall semester designing the bridge. This spring, leading up to the competition, they fabricated the bridge in the Student Design and Experiential Learning Center on the S&T campus, spending approximately 750 hours total in the shop.