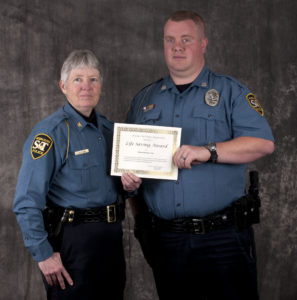 A Missouri University of Science and Technology police officer received the Life Saving Award from Missouri S&T for performing cardiopulmonary resuscitation, or CPR.

Officer Brandon Guth immediately took action and performed CPR on a 7-month-old baby, enabling the infant to be transported to a local hospital for additional treatment.

During the late morning of March 6, Guth and his patrol partner were making their rounds near campus when they received a dispatch stating that an infant at a local gas station was having difficulty breathing. Guth and his partner were first to arrive at the scene.

While the other officer waited outside to direct the arriving paramedics, Guth entered the business and performed the life-saving exercise. Emergency medical technicians later took over and rushed the infant to the hospital. Guth was awarded the Life Saving Award for his efforts by his superiors.

“They had the best possible officer to take the call,” says Missouri S&T Police Chief Christine Laughlin. “Officer Guth has more experience than most in CPR and trains the campus officers in the discipline.”

Guth has held his CPR certification for 10 years and, prior to joining the Missouri S&T police, was an EMT.

“When I arrived on the scene, training really took over,” explains Guth. “Every officer has something they specialize in, and I provided CPR until the ambulance arrived.”

One thought on “S&T officer recognized for stabilizing infant”