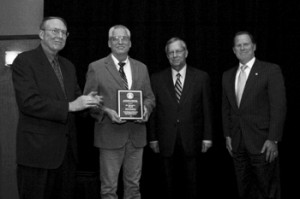 Each year, the Governor’s Award is presented to one faculty member at each institution of higher education in Missouri. This year’s recipients were honored by Gov. Jay Nixon during an April 3 luncheon at the Reynolds Alumni Center in Columbia, Mo.

The awards, which are not monetary, are based on effective teaching, innovating course design and delivery, effective advising, service to the university community, commitment to high standards of excellence and success in nurturing student achievement.

Frank has been a member of the Missouri S&T faculty for 24 years. An expert in evolution, general genetics, molecular genetics and genomics, Frank studies the identification of gene families using computer algorithms, the evolution and expression of gene families in plants and phenylalanine ammonia lyase genes in soybeans.

Frank as served as faculty advisor to the student chapter of Phi Sigma National Biological Honor Society since he helped establish the chapter in 1994 and has overseen the induction of 320 new members to the organization.

He has co-authored journal articles with computer science colleagues on the development of bioinformatics tools and protein structure prediction and has supervised more than 80 undergraduate research projects, providing young scientists with access to cutting-edge technologies including current techniques in genomics and proteomics research.

Frank earned a bachelor of science degree in biology from Houghton College in 1978. He earned master of science and Ph.D. degrees in genetics from Ohio State University in 1981 and 1985, respectively.

On May 2, 2013. Posted in Department of Biological Sciences, Featured, People