Four solar homes built by students at Missouri University of Science and Technology will soon become home to an experimental microgrid to manage and store renewable energy. The houses, all past entries into the Solar Decathlon design competition, make up the university’s Solar Village. 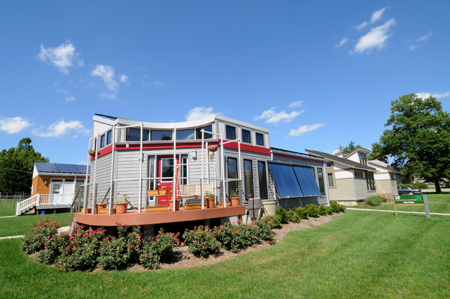 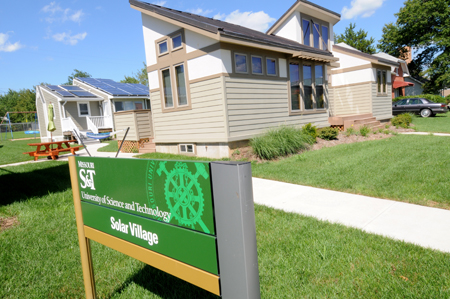 In its initial phase, the project involves Missouri S&T students and researchers, along with representatives from utility companies, the Army Corps of Engineers and several Missouri businesses. The goal is to demonstrate the feasibility of small-scale microgrids for future use.

“Distributed power generation is one of the key elements of a microgrid. In our case, we’re using solar panels,” says Dr. Mehdi Ferdowsi, associate professor of electrical and computer engineering at Missouri S&T. “It’s called a microgrid because it’s less dependent on the utility power grid. The idea is that if there is a blackout, it can operate in what we call ‘islanded mode,’ and convert to using stored solar energy.

“Utility companies are interested to see if this could be a viable business model for the future,” he says. “For example, they could rent out renewable energy generators to subdivisions, creating a new paradigm for selling electricity.”

Ferdowsi says that Missouri S&T’s Solar Village is an ideal place to test microgrid technology. “The four houses were built in a 10-year span of time and each was designed individually, but converting them to the technology is not complicated,” he says.

Students living in the solar houses will monitor the results. “We hope to demonstrate that the technology is expandable to many, based on these four houses,” he says. “The students will also demonstrate the human aspect of the project — how people interact with a new system of energy management.”

Components necessary for the project include batteries for energy storage, a power electronic converter, software and hardware.

Two lithium battery racks were donated by A123 Systems Inc. (now Wanxiang Group) in December. Ferdowsi estimates their combined worth at $75,000 to $100,000. “These batteries are very efficient, but they are super heavy with 8-foot-tall racks,” he says. “We hope to have them installed in a shed in the Solar Village by the end of summer, along with the converter.” The hardware and software would be located in the houses.

Photovoltaic (PV) arrays on the solar homes are designed to generate about 25 kilowatts of power. The donated batteries will provide 60 kilowatt hours of energy storage for the microgrid.

Researchers are now deciding which converter and intelligence system to purchase. “Security is also a factor — we want to be sure the system is hacker-proof,” says Ferdowsi.
Several Missouri S&T alumni serve on the advisory council that was created to guide the integration of microgrid components into the Solar Village, and to ensure the microgrid is designed for future expansions.

One, alumnus Brent McKinney, manager of electrical transmission with City Utilities of Springfield (Mo.), helped facilitate a $75,000 grant for the project through the American Public Power Association. The grant will help fund battery array installation and graduate student research in community energy storage.

Dr. Fatih Dogan, professor of materials science and engineering at S&T, has been working with St. Louis-based utility company Ameren, which plans to provide and install a residential fuel cell and heat recovery demonstration unit in the village. The fuel cell will serve as an additional microgrid component.

“There is so much potential in this project, and so many groups that can benefit from it,” says Angela Rolufs, director of the office of sustainable energy and environmental engagement at Missouri S&T, which manages the Solar Village. “We had this great idea and all the pieces for it — we just needed some help making it happen.”