Researchers design nanometer-scale material that can speed up, squeeze light

The cross-section of a 100-nanometer-long “meta-atom” of gold and silicon oxide. Researchers say the meta-atom is capable of straightening and speeding up light waves.

In a process comparable to squeezing an elephant through a pinhole, researchers at Missouri University of Science and Technology have designed a way to engineer atoms capable of funneling light through ultra-small channels.

Their research is the latest in a series of recent findings related to how light and matter interact at the atomic scale, and it is the first to demonstrate that the material – a specially designed “meta-atom” of gold and silicon oxide – can transmit light through a wide bandwidth and at a speed approaching infinity. The meta-atoms’ broadband capability could lead to advances in optical devices, which currently rely on a single frequency to transmit light, the researchers say.

“These meta-atoms can be integrated as building blocks for unconventional optical components with exotic electromagnetic properties over a wide frequency range,” write Dr. Jie Gao and Dr. Xiaodong Yang, assistant professors of mechanical engineering at Missouri S&T, and Dr. Lei Sun, a visiting scholar at the university. The researchers describe their atomic-scale design in the latest issue of the journal Physical Review B (“Broadband epsilon-near-zero metamaterials with steplike metal-dielectric multilayer structures,” Phys. Rev. B 87, 165134 2013). 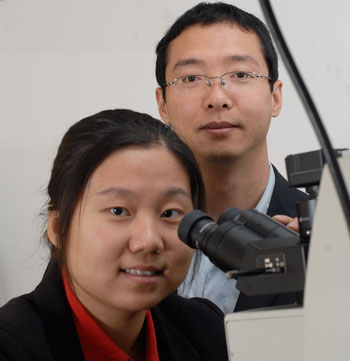 The researchers created mathematical models of the meta-atom, a material 100 nanometers wide and 25 nanometers tall that combined gold and silicon oxide in stairstep fashion. A nanometer is one billionth of a meter and visible only with the aid of a high-power electron microscope.

In their simulations, the researchers stacked 10 of the meta-atoms, then shot light through them at various frequencies. They found that when light encountered the material in a range between 540 terahertz and 590 terahertz, it “stretched” into a nearly straight line and achieved an “effective permittivity” known as epsilon-near-zero.Effective permittivity refers to the ratio of light’s speed through air to its speed as it passes through a material. When light travels through glass, for instance, its effective permittivity is 2.25. Through air or the vacuum of outer space, the ratio is one. That ratio is what is typically referred to as the speed of light.

As light passes through the engineered meta-atoms described by Gao and Yang, however, its effective permittivity reaches a near-zero ratio. In other words, through the medium of these specially designed materials, light actually travels faster than the speed of light. It travels “infinitely fast” through this medium, Yang says.

This stretching phenomenon means that “waves of light could tunnel through very small holes,” Yang says. “It is like squeezing an elephant through an ultra-small channel.”

The wavelength of light encountering a single meta-atom is 500 nanometers from peak to peak, or five times the length of Gao and Yang’s specially designed meta-atoms, which are 100 nanometers in length. While the Missouri S&T team has yet to fabricate actual meta-atoms, they say their research shows that the materials could be built and used for optical communications, image processing, energy redirecting and other emerging fields, such as adaptive optics.

Last year, Albert Polman at the FOM Institute for Atomic and Molecular Physics in Amsterdam and Nader Engheta, an electrical engineer at the University of Pennsylvania, developed a tiny waveguide device in which light waves of a single wavelength also achieved epsilon-near-zero. But the Missouri S&T researchers’ work is the first to demonstrate epsilon-near-zero in a broadband of 50 terahertz.

“The design is practical and realistic, with the potential to fabricate actual meta-atoms,” says Gao. Adds Yang: “With this research, we filled the gap from the theoretical to the practical.”

Through a process known as electron-beam deposition, the researchers have built a thin-film wafer from 13 stacked meta-atoms. But those materials were uniform in composition rather than arranged in the stairstep fashion of their modeled meta-atoms.

One thought on “Researchers design nanometer-scale material that can speed up, squeeze light”