Tyler Fenwick, who has served as the offensive coordinator at Missouri Western State University for the past six seasons, has been named as the new head football coach at Missouri S&T. 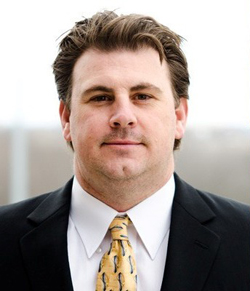 Fenwick has been part of a Missouri Western program that has played in the post-season in each of the six seasons that he was on the staff, including an appearance in the NCAA Division II quarterfinals in 2012. Prior to that, he spent five years on the staff at Occidental College in California – the last four as offensive coordinator – and one season as offensive coordinator at Minnesota State University Moorhead, where the Dragons posted their first winning season in seven years.

He will be the 19th head coach in the history of the Miner program and seventh since 1937. Fenwick is taking over for David Brown, who stepped down from the position last month to join the coaching staff at Fresno State University.

“I am very excited for the opportunity to be the head football coach at Missouri S&T,” Fenwick said. “I am thankful for Mark Mullin and his staff to give me my first head coaching job. The program has been left in a healthy state and I hope to help continue moving the program to the next level. I am anxious to get around the players and begin to help them grow on and off the football field.

“Schematically we will look similar on offense and defense, although there will be some tweaks from my background,” Fenwick added.

“We are extremely pleased to have Tyler and his family join us. He brings outstanding experience to our institution,” said Mullin, Missouri S&T’s director of athletics. “The combination of achieving great success at Missouri Western and at Occidental College is impressive and prepares him well to take over the Miner program.

“Tyler’s personality, enthusiasm, experience, and vision will make him an outstanding addition to our staff and an asset to our department, the campus, and the community,” Mullin added. “I am confident Tyler will be an outstanding leader for our football program and I am excited that he will be here in time to begin spring practice with the team.”

In the 2012 season, Missouri Western won the outright Mid-America Intercollegiate Athletics Association championship for the first time in school history and had one of the nation’s top offensive units that included running back Michael Hill, a finalist for the Harlon Hill Award and second-ranked rusher in the nation in NCAA Division II. The Griffons averaged 458.6 yards of total offense last season, including 264.4 per game on the ground and 41.6 points a game; the latter two figures ranked among the top 10 nationally in Division II.

Missouri Western scored 30 or more points in 11 of its 14 games in its 12-2 campaign and set a school record with 582 points scored.

In 2011, the Griffons averaged 35.5 points a game and rushed for 240.6 yards per game but prior to that season, had one of the better passing attacks in the MIAA behind quarterback Drew Newhart, who was the conference’s “Freshman of the Year” in Fenwick’s first season as offensive coordinator. Missouri Western set its single-season scoring record of 451 points – the mark broken in 2012 – during the 2009 season and broke a number of the school’s passing records in those seasons.

During the six years Fenwick spent as offensive coordinator at Missouri Western, the Griffons averaged 432.8 points per season and 35.1 points per game. As a team, the Griffons went 53-18 and played in the NCAA Division II playoffs three times as well as making three bowl appearances.

Fenwick served as the offensive coordinator at Minnesota State-Moorhead in 2006 and guided an offensive unit that improved its yardage totals by 65 percent from the previous year, as the Dragons won four of their last five games to finish with a 6-5 record.

At Occidental, he was the wide receivers coach during the 2001 season as the Tigers went 8-1 and won the Southern California Intercollegiate Athletic Conference championship, then moved into the offensive coordinator role the following season. Over the four years in which he served in that role, Occidental had a 33-9 record, won two SCIAC titles and made two appearances in the NCAA Division III playoffs, winning twice in the 2004 tournament. During those five years, he coached four all-conference quarterbacks and twice had the conference’s “Offensive Player of the Year”.

Fenwick is originally from Los Angeles, Calif., and graduated from Chaminade College Preparatory High School. He attended Los Angeles Valley College and the University of New Mexico, where he earned his bachelor’s degree in university studies in 1999. A two-year letterman for the Lobos as a wide receiver, he caught 14 passes during the two years in which he played at UNM.

He began his coaching career at the high school level at Birmingham High School in Lake Balboa, Calif., as the program’s offensive coordinator, helping guide the team to a conference championship and playoff appearance as it finished with a 10-2 record.

Fenwick and his wife, Angela, have three children, daughter Kylie and sons Kayden and Kiptyn. His father, Jim, has been a highly successful coach at the collegiate and high school levels in California.