“Tornado Alley,” a 22-minute 3D film about the science behind tornadoes and storm-chasing, will be shown Tuesday, March 5, at the Havener Center on the Missouri University of Science and Technology campus as part of a communitywide outreach on severe weather safety. 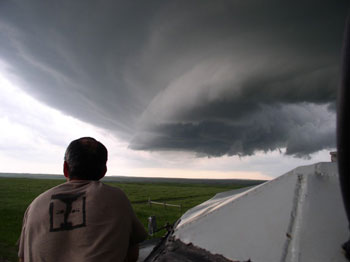 A stormchaser from the movie “Tornado Alley” keeps an eye on a developing storm. (Watch trailer.)

The movie will be shown at 7 p.m. Tuesday, March 5, in the Havener Center to promote Tornado/Severe Weather Emergency Sheltering in Schools Workshop, which will be held the following day. In addition to the film, presenters will display weather research vehicles, including a tornado intercept vehicle, outside the Havener Center.

Both the film and the workshop are sponsored by the Missouri Mathematics and Science Coalition, Missouri Center for Education Safety and the Missouri School Boards’ Association in conjunction with Missouri S&T. Following the movie will be a discussion about the movie and the science of storm-chasing. The event is free and open to the public.

Watch the trailer for Tornado Alley.

On Wednesday, March 6, the Tornado/Severe Weather Emergency Sheltering in Schools Workshop will be held from 9:30 a.m.-3:30 p.m. at Eugene Northern Community Hall, 400 W. Fourth St. in Rolla. The workshop is intended for school officials responsible for emergency planning as well as public safety and emergency management leaders in the community.

During the March 6 workshop, Missouri S&T engineering faculty and students will be on hand to offer their perspective on school emergency sheltering plans.

For more information about the film, contact Keith Strassner, director of technology transfer and economic development at Missouri S&T, by calling 573-341-6725 or emailing kdstrass@mst.edu.