If “third time’s a charm” were a category on the quiz show “Jeopardy!” then “Who is Dr. Ilene Morgan?” might be one of the questions. 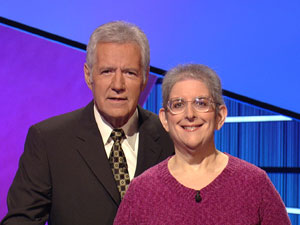 Dr. Ilene Morgan, an associate professor of mathematics and statistics, makes her “Jeopardy!” debut on March 5, 2013. She is shown here with host Alex Trebec.

“This Missouri University of Science and Technology faculty member tried twice to land a spot on this program before finally succeeding in 2012.”

A longtime trivia buff and a “Jeopardy!” fan since childhood, Morgan will make her “Jeopardy!” debut on the Tuesday, March 5, episode of the show. The associate professor of mathematics and statistics describes her “Jeopardy!” appearance as “bucket-list awesome” and adds that recording the program before a studio audience didn’t bother her.

“I was not thinking about the audience, or the camera, or the money,” Morgan says. “I was just playing trivia, and I was having fun.”

Locally, the program airs at 4:30 p.m. on KSDK, the NBC affiliate in St. Louis, and at 5 p.m. on KSPR, the ABC affiliate in Springfield, Mo. Missouri S&T will hold a “Jeopardy!” watch party for Morgan during the 4:30 p.m. airing on March 5 in the Hall of Fame Room (Room G-25) of S&T’s Gale Bullman Multi-Purpose Building. If attendance exceeds the room’s capacity, a second watch party will be held at 5 p.m. in the same room.

Morgan’s pursuit of an appearance on the program has been anything but trivial. Her quest began online, where she played the official version of the game all would-be contestants must complete. In 2007 and again in 2009, her score on the 50-question quiz was good enough to make her eligible to audition for the show. That in itself is no small feat.

During each audition – the first was in Chicago, the next in Kansas City, Mo. – Morgan took another 50-question trivia quiz, then played a simulated game and took part in a mock interview, similar to the question-and-answer session “Jeopardy!” host Alex Trebek holds with contestants on the air.

“They wanted to see how well you follow directions,” she says. They’re also looking at how would-be contestants appear on stage, Morgan adds.
“They really want people to speak up, be energetic and keep the game moving along.”

She wasn’t selected for the show. Under “Jeopardy!” rules, she was not allowed to take the online test for 18 months. But undeterred, once she was again eligible, Morgan tried again, performed well on the test and was called to a third tryout. She returned to Chicago to audition last May. In early October, “I got the message on my cell phone: ‘Hello, this is Robert from “Jeopardy!” Why don’t you give me a call?'” Morgan says.

That was on a Thursday, and Robert said in his message that he would be inaccessible until Monday. “So I had all weekend to think about it and realize that it could be happening,” she says.

She traveled to Culver City, Calif., to compete on Oct. 29 and 30. Producers record five games on each day, one right after the other.

Once she learned that she would be a contestant, “My first reaction was disbelief. But then it sank in and I was excited about it.”

But she didn’t cram for her appearance.

“Some people go on a study binge” to prepare for the show, Morgan says. “I did some studying. I made some lists. But I didn’t go crazy with it.”

She also had some help from members of Missouri S&T’s Academic Competition Organization, the campus’s quiz bowl team, who peppered her with trivia questions. This was a switch for Morgan, who, as advisor to the team, usually quizzes the students. (Morgan also co-founded the team in 1994 with chemical engineering student Mark Rooney, who graduated in 1997.)

She also trained at home by playing along with the show and clicking an ink pen as a “buzzer” to work on her timing.

Once in Culver City, Morgan and her fellow contestants – 12 other men and women, including a three-time returning champion – were shuttled to the studios on Monday morning, Oct. 29. They spent the morning prepping for their appearance, with each contestant playing two mock games to make sure contestants were at ease and able to use the buzzers.

“They did a remarkably good job of taking normal people and making us camera-ready,” Morgan says.

Contestants also prepared anecdotes that could be shared during the actual games and recorded their “hometown howdies,” promotional clips for the show to run on local stations.

After all the preparation, contestants wait until they are called on to the stage. “You don’t know (whether you’re playing in a particular contest) until 10 minutes before the game,” Morgan says.

While she won’t divulge how she fared as a contestant or whether she won any games, Morgan says that she achieved her goal of having a good time.

“Before I went in, I decided that, win or lose, the experience was going to be bucket-list awesome,” she says. “And it was.”

But there were some nerve-wracking moments.

“There were runs where I did really well on the buzzer,” she says, “and then there were some runs when I was frustrated because I knew the answer but someone beat me to the buzzer. One of those was on a math question.”

A frequent participant in local trivia contests, often on teams with other Missouri S&T faculty, Morgan enjoys trivia for the fun of it. And she’s known on campus for her expertise at trivia.

“I have a brain like flypaper,” she says. “Random things will kind of stick to it.”

But success on “Jeopardy!,” like trivia games, is “more about being knowledgeable” about a variety of things than it is about intelligence, Morgan says.

On February 18, 2013. Posted in Department of Mathematics and Statistics, News, Top Headlines