Dr. Sriram Chellappan, an assistant professor of computer science at Missouri University of Science and Technology, has been chosen to receive the National Science Foundation’s most prestigious award for young faculty members for his work on understanding human behavior through Internet usage patterns. 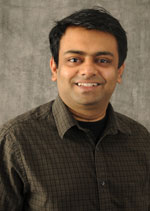 Chellappan has received the NSF’s Faculty Early Career Development CAREER Award. The NSF describes the CAREER Awards as the agency’s “most prestigious awards in support of junior faculty who exemplify the role of teacher-scholars through outstanding research, excellent education and the integration of education and research within the context of the mission of their organizations.”

Chellappan, a member of the Missouri S&T faculty since 2008, will use the CAREER Award funding to continue his research on Internet data processing techniques and classification algorithms in his efforts to determine how Internet usage patterns can lead to a better understanding of human behavior. In a recent study of how Missouri S&T students use the Internet, Chellappan and his fellow researchers found that students who show signs of depression tend to use the Internet differently than those who show no symptoms of depression.

In that study, published in the December 2012 issue of IEEE Technology and Society Magazine, Chellappan and his colleagues found that students who showed signs of depression tend to use file-sharing services, send email and chat online more than the other students. Depressed students also tended to use higher “packets per flow” applications, those high-bandwidth applications often associated with online videos and games, than their counterparts.

Chellappan is now interested in using these findings to develop software that could be installed on home computers to help individuals determine whether their Internet usage patterns may indicate depression. The software would unobtrusively monitor Internet usage and alert individuals if their usage patterns indicate symptoms of depression. He also believes the method used to connect Internet use and depression could help diagnose other mental disorders like anorexia, bulimia, attention deficit hyperactivity disorder or schizophrenia.

Chellappan will receive $428,409 in CAREER funding over three years to continue his research. The award takes effect on Feb. 1, 2013.

His professional affiliations include IEEE, where he has served as finance and publicity chair for the organization’s Symposium on Reliable Distributed Systems and as a member of the IEEE Advanced Information Networking and Applications. He also served as a member of the International Conference on Mobile Ad-Hoc and Sensor Networks.