Missouri University of Science and Technology is one of five Ph.D.-granting universities in the nation to be selected a finalist in the Second Nature 2013 Climate Leadership Awards.

The Climate Leadership Awards is an annual competition among U.S. colleges and universities that are signatories of the American College & University Presidents’ Climate Commitment. The awards program is sponsored by Second Nature, a national nonprofit that seeks to create a sustainable society by transforming higher education, and PlanetForward, a media company that publishes news, opinion, and insight about energy, climate, and sustainability.

Missouri S&T’s selection as a finalist is associated with two innovations in sustainability: 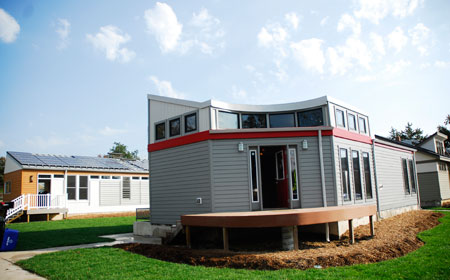 Missouri S&T’s Solar Village is an innovative approach to sustainable living that helped S&T earn its position as a finalist for the 2013 Climate Leadership Awards.

This year, the award program’s fourth, drew the largest and most competitive pool of nominations to date. Second Nature will partner with PlanetForward, a web-to-television initiative that documents and shares energy, climate, and sustainability advances, on a public voting competition featuring the Finalists’ climate leadership and campus innovations during Earth Month (April 2013).

“The caliber of this year’s nominations is unparalleled,” said ACUPCC Director Ashka Naik. “The depth and breadth of climate leadership and sustainability education programs demonstrated by these finalists is a reflection of their deep commitment to truly innovative solutions for a sustainable future.”

The awards will feature a public, online voting component. Each of the finalists will produce a video that promotes its specific sustainability efforts. Voting will be open during Earth Month, April 2013. Last year’s voting competition drew more than 70,000 video views and 14,000 votes.

In late spring, award winners will be chosen, independent of the video voting competition, by members of the Second Nature Board not affiliated with ACUPCC signatory schools.
More information on the awards is at www.secondnature.org/awards.