An undergraduate student at Missouri University of Science and Technology has received national recognition for his research on a process for creating rare-earth phosphates. The process could be used to develop materials for optical sensors and diode lighting applications, such as LED (light-emitting diode) lighting. 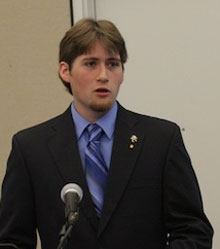 For his efforts, Ryan received the American Ceramic Society‘s Alfred R. Cooper Award for research. The award is presented by ACerS’s Glass and Optical Materials Division to recognize the best undergraduate student research in the field. Ryan received the award at the ACerS annual meeting in October in Pittsburgh.

By placing water-soluble borate glass containing small concentrations of the rare-earth oxides lanthanum and europium in a solution containing phosphate, Ryan found that the glass released the rare-earth ions to react at the glass surface with the phosphate ions in the solution. The reaction formed rare-earth phosphates that could be used for a variety of materials engineering applications.

“We can tailor the optical properties of the final precipitated solid-solution phases, depending on the original composition of the glass,” says Brow. “As far as we know, this is the first time solid-solution precipitation phases have been prepared in this manner.”

Ryan adds that the borate glass, when melted into microscopic spheres or fibers and dissolved, leave behind hollow structures. Optically active rare-earth ions, such as europium, then produce fluorescing (glowing) materials.

“Lanthanum and europium phosphates both have the same crystal structure, and we wanted to find out if they would form solid solutions, or if they would produce separate phases” when the glass containing them was dissolved, Ryan says. “This project was designed as a proof-of-concept experiment to determine if the solid solutions were feasible, because such materials would have much more interesting optical properties.”

About 15 years ago, several students of Dr. Delbert Day, Curators’ Professor Emeritus of ceramic engineering, demonstrated that single-phase rare-earth phosphate materials could be formed by this process. Ryan and George have extended that result to include broader solid-solution compositions. A publication of their work will be submitted to the Journal of the American Ceramic Society in January.

Ryan will graduate with his bachelor of science degree from Missouri S&T in May 2013. After graduation, he plans to pursue a Ph.D. in ceramic engineering or glass science.