Phillip Phillips, the 2012 winner of television’s “American Idol” singing competition, is scheduled to perform a concert at Missouri University of Science and Technology on Friday, Jan. 25, 2013. 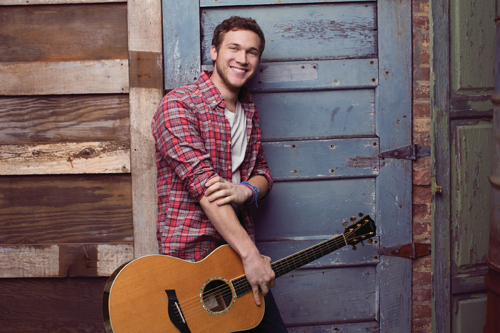 Phillips’ performance will be held at Missouri S&T’s Leach Theatre of Castleman Hall, 10th and Main streets in Rolla. Tickets are $25 for the public and $20 for Missouri S&T students.

Missouri S&T students will have the first opportunity to purchase tickets. Beginning at 9 a.m. Monday, Dec. 10, 200 tickets will be made available to students presenting a valid S&T student I.D. at the Leach Theatre Box Office, located in the vestibule inside the main entrance to the theater, facing 10th Street. Students may purchase one ticket per S&T student I.D. and each student may present up to two S&T student I.D.s.

Remaining tickets will be made available to the public beginning at 9 a.m. Tuesday, Dec. 11, at the box office. No phone orders will be taken and tickets are limited to four per person. Box office hours are from 9 a.m. to 4 p.m. Monday through Friday.

Phillips was named the winner of the “American Idol” competition on the show’s finale last spring after a record-breaking total of 132 million votes were cast. His coronation song, “Home,” was released after his performance and had the biggest digital sales week for any ‘Idol’ winner’s coronation song.

After winning the competition, Phillips traveled with the “American Idol LIVE Tour.” He appeared on the PBS Independence Day TV special “A Capitol 4th” and performed at Major League Baseball’s All-Star game in Kansas City in July. In October he performed at the One World concert held at Syracuse University to honor the Dalai Lama and sang the National Anthem at the opening game of the 2012 World Series.

Phillips wrote or co-wrote the majority of the songs on his debut album “The World from the Side of the Moon,” which was released in November.

The performance is sponsored in part by Sunny Radio 104.5 in Rolla.