Dr. Petra DeWitt, assistant teaching professor in history and political science at Missouri University of Science and Technology, has been chosen to receive the 2012 Missouri History Book Award from the State Historical Society of Missouri.

The award, which will be presented during the society’s annual meeting in Columbia, Mo., on Nov. 3, is given annually to the author of the best book written on the history of Missouri and Missourians. The award carries a citation and a $1,500 cash prize. 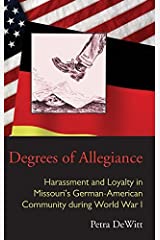 DeWitt will receive the award for her book titled Degrees of Allegiance: Harassment and Loyalty in Missouri’s German-American Community During World War I, which was published by Ohio University Press in April 2012.

“The book is about the home front during the Great War,” DeWitt says. “Historians in the past argued that government-sponsored propaganda contributed to an anti-German sentiment in the country that led to the destruction of all things German in the nation, including cultural aspects.”

DeWitt’s book takes a local, rather than national, perspective.

“My book reveals that local economic, social and political relationships, not national leadership, shaped lives and the paranoia on the home front during World War I. As a result, German-Americans were able to maintain their German cultural traits in some areas while in others they were more likely to give up their German traits.”

DeWitt, who has taught at Missouri S&T since 2003, earned a bachelor of arts degree in history from Missouri S&T in 1996. She also holds a master of arts from Truman State University and a Ph.D. from the University of Missouri-Columbia, both in history.

She specializes in migration and ethnic history and has published several articles and encyclopedia submissions on the subject. She teaches American history survey courses, Historiography, Making of Modern Germany, European Migrations and Nationalism and World Regional Geography, among other courses.

DeWitt is currently working on a biography of Harvey Milk, which she is co-authoring with Dr. Michael Meagher, associate professor of history and political science at Missouri S&T. Her current research focuses on Fred E. Frank, an Austrian-American who went from riches to rags while living in Missouri in the late 19th century, and G.A. Hoehn, a German- born Social-Democrat who influenced the St. Louis chapter of the Socialist Party in the late 19th and early 20th century.

On October 26, 2012. Posted in Department of History and Political Science, News, Top Headlines