Dr. Joseph D. Smith, the Laufer Chair of Energy at Missouri University of Science and Technology, will become director of Missouri S&T’s Energy Research and Development Center on Sept. 1. 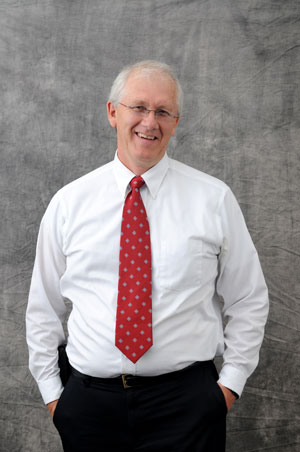 “Dr. Smith brings a multidisciplinary expertise that will help the university build upon a solid foundation of energy research in innovative and forward-looking ways,” says Dr. K. Krishnamurthy, Missouri S&T vice provost for research. “I’m looking forward to working with Dr. Smith as S&T continues to lead the way forward in addressing some of our nation’s most critical energy challenges.”

Smith joined Missouri S&T in July 2011. He will replace Dr. Mariesa Crow, who has served as the founding director of the energy center since its formation Sept. 1, 2006. Crow will continue her teaching and research activities as the Fred W. Finley Distinguished Professor of Electrical Engineering at S&T.

“Dr. Crow has provided tremendous leadership for our university’s multidisciplinary energy research efforts,” Krishnamurthy says. “Under her leadership, Missouri S&T has grown an international reputation in a variety of energy-related research fields, including the power grid and smart grid research, renewable energy, and energy security.”

Krishnamurthy adds that one of the most notable accomplishments during Crow’s tenure as ERDC director was S&T’s involvement in the National Science Foundation’s FREEDM Systems Engineering Research Center for developing an “Internet for energy” smart grid network. Missouri S&T is one of seven universities involved in FREEDM, which stands for Future Renewable Electric Energy Delivery and Management.

As director of the ERDC, Smith will be responsible for coordinating and leading various energy-related research activities. Approximately 35 Missouri S&T faculty members are involved in energy-related research. Their expertise includes coal, nuclear energy, and petroleum and natural gas; energy transportation, transmission and distribution; electric power generation and delivery efficiency; alternative and renewable energy sources; energy conservation and efficiency; and the environmental aspects of generation, transport and consumption of energy resources.

“Energy security is our generation’s grand challenge,” Smith says. “Wars have been fought over energy and our nation’s future will be defined by how we address our growing energy needs. Finding and using economically and environmentally sustainable energy is essential to supporting the economy and minimizing our impact on the environment. I am excited for the focus this position provides to address our grand challenge.”

Smith earned Ph.D., master of science and bachelor of science degrees in chemical engineering from Brigham Young University in 1990, 1984 and 1983, respectively. He holds 7 U.S. patents with two more pending, has authored or co-authored more than 40 technical papers, book chapters, and reports, and presented at more than 50 technical conferences. Currently, Smith is working on a book for CRC focused on Hybrid Energy Systems.

Smith has also spent more than 20 years working in industry, most recently serving as manager of advanced process and decision systems for the Idaho National Laboratory. He is also co-founder and president for Systems Analyses and Solutions in Tulsa, Okla. He is a member of the American Institute of Chemical Engineers, the American Society of Mechanical Engineers and the Sigma Xi Scientific Research Society.

Smith is the first person to hold the Laufer Chair of Energy. The position was established through a 2009 gift of $3.4 million from Wayne Laufer, a 1967 civil engineering graduate of Missouri S&T, and his wife, Gayle.

Laufer, who spent his career in the energy industry, is the retired co-founder and CEO of Bois d’Arc Energy Inc., an NYSE Houston-based company that specialized in offshore oil and natural gas exploration and production. Laufer retired from Bois d’Arc executive management in November 2007 but remained active on the board of directors until the company was sold to Stone Energy Corp. for $1.6 billion in August 2008.