NASA astronaut Sandra Magnus delivered two commencement addresses at Missouri University of Science and Technology, May 4 and May 5. She told the new graduates that “the sky is not the limit, trust me.” 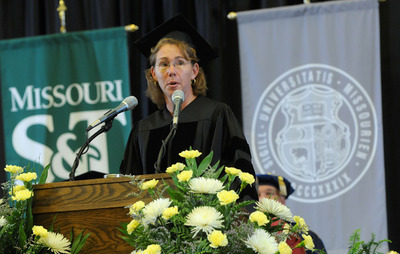 Magnus, who was a crew member on the final space shuttle mission last summer, earned a bachelor’s degree in physics and a master’s degree in electrical engineering at Missouri S&T. “Having attended this university, I know how hard you have worked to be here today,” she said in her speech.

She told the grads to believe in themselves and to utilize the skills they have received. “Big hairy problems do not overwhelm you nor paralyze you with fear – you have already conquered a bunch,” Magnus said. “I refer you to your statistics and dynamics classes, or any conversation you have ever had in a philosophy class.”

A native of Belleville, Ill., Magnus acknowledged that she already knew she wanted to be an astronaut when she was in college. But she also said that it is never too late to keep asking yourself what you want to be when you grow up.

Magnus, who also holds a doctorate from Georgia Tech, was selected to join NASA in 1996. She made three shuttle voyages. In 2008-2009, she spent more than four months orbiting Earth on the International Space Station.