Geothermal project to cut energy usage by half

By the time a geothermal energy project at Missouri University of Science and Technology is completed in 2014, the campus’s annual energy use will be cut in half and its carbon footprint reduced by 25,000 metric tons per year.

ARVE Error: need id and provider
University officials broke ground on the project on Tuesday, April 17, by drilling a hole in one of the geothermal well fields northeast of Emerson Hall, the campus’s electrical and computer engineering building.

Missouri S&T’s geothermal energy system will replace the university’s aging coal-fired power plant, which was constructed in 1945. The system is also one of the most comprehensive ever undertaken by a college or university, says Missouri S&T Chancellor Cheryl B. Schrader. 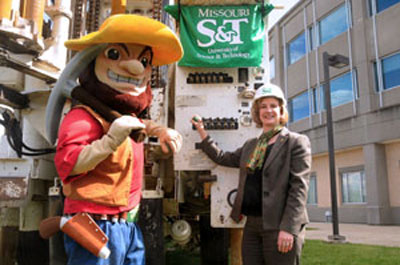 Missouri S&T Chancellor Cheryl B. Schrader, assisted by mascot Joe Miner, prepares to flip the lever on a drill to break ground for S&T’s geothermal energy project. When completed in 2014, the geothermal energy system is expected to reduce the campus’s energy usage by 50 percent.

“Several campuses have created small-scale geothermal systems to provide energy for a residence hall – or perhaps to a few buildings on campus,” says Schrader. “But only a few other campuses in this nation have ever attempted to construct a system on a campuswide scale.”

In 2010, the University of Missouri System Board of Curators approved Missouri S&T’s plan to construct the geothermal system. Initially, the system is expected to save more than $1 million annually in energy and operational costs, but that savings is expected to grow to $2.8 million a year.

The project will also eliminate a backlog of about $26 million in deferred maintenance costs for the aging power plant. Those costs include the replacement of boilers, steam lines and other antiquated infrastructure.

The system will also reduce Missouri S&T’s water usage by about 10 percent, or 8 million gallons per year.

Construction of the geothermal system will officially begin in May with the drilling of ground-source wells around campus. Pipes will be installed in the wells and connected to create closed geothermal loops. Water will be circulated through the loops from three campus geothermal plants that will be constructed as part of the project.

The system will allow energy to be stored in and reclaimed from well fields around campus. Approximately 600 wells will serve the three campus geothermal plants. Drilling will begin in May and continue through the summer.

The geothermal plants will be housed in Emerson Hall, McNutt Hall and a future building that will be constructed in 2013 and 2014. That building, James E. Bertelsmeyer Hall, will house S&T’s chemical and biological engineering department.

Each of the three plants will contain heat pump chillers, supplemental cooling towers and gas-fired boilers to provide geothermal energy to surrounding areas of campus.

Upon completion of the geothermal project, the power plant boilers will be decommissioned.

The project is funded through the sale of $32.4 million in revenue bonds, approved by the curators in November 2010. The university plans to repay the debt over 30 years through savings from the project.